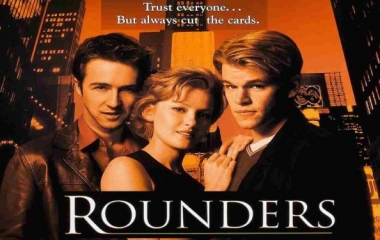 John Dahl’s “Rounders” is considered one of the most captivating gambling movies of all time. This flick was not a huge box-office success with its $22.9 million ticket income. However, the meteoric rise of poker over the last 20 years has elevated it into a cult classic that most fans of the game watch at some point.

The mere fact that you’re here is a testament to the film’s lasting appeal. Our review is designed to satisfy the curiosity of those who haven’t seen “Rounders” yet as well as fans who have questions about the cast, crew, production, and the various scenes. Our Rounders movie review will also warn you about incoming spoilers, but do note that the majority of them are in the synopsis.

Is the Rounders Movie Suitable For You?

The first part of our article is intended for those still pondering whether it’s worth dedicating two hours to watch this movie. Feel free to scroll down if you’re looking for other information. We’ll begin by stating that you shouldn’t consider this flick as a comprehensive poker tutorial. While the bare basics of Texas Hold’em are covered in the beginning, you won’t receive proper explanations for hand rankings, the four betting rounds, and other important aspects of the game.

Nearly every second line in the script is full of jargon that may seem foreign to the casual viewer. Still, that doesn’t mean that the Rounders movie is intended for a niche audience. Even if you’re not a die-hard poker fan, you’ll understand what’s going on as the scenes unfold. You can consider it as a good initiation to the crazy world of no-limit Texas Hold’em. You’ll also pick up some tips that will help you when playing offline.

Of course, if you’re not the slightest bit interested in poker or gambling in general, you’re better off seeing something else. There’s also a fair bit of profanity and some violence, drug use, and partial nudity, so you probably shouldn’t watch it with kids under 16.

A Small Glossary to Get You Going

Our Rounders movie review also includes a concise glossary that will acquaint you with some of the frequently used terms. This list isn’t exhaustive, but it should help you get a better understanding of what’s going on. 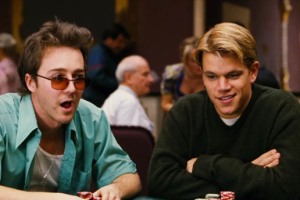 All-in — Placing your entire stack of chips in the middle of the pot. Basically, betting everything on the hand that you have.

Bankroll — The amount of money you’ve set aside for a poker session. Usually converted into playing chips.

Blinds — In Texas Hold’em, these are forced bets that players have to make to participate in the following round.

Card mechanic — A cheater who uses sleight of hand movements to manipulate the deck, thus giving themselves and/or their partners an edge over other participants.

Check — A player checks when they wish to pass the action to other players without staking additional chips. If the player before you bet additional money, you can either call (match their bet), raise (bet even more) or fold (stop playing and lose the bets you’ve placed) but can’t check.

Laying down a hand — Another term for folding, usually used when the decision is difficult.

Pot — The sum of money wagered by all players during a single hand/game.

Splashing the pot — Spilling your chips all over the table instead of arranging them neatly in the middle.

Rounder — A person who has chosen poker as their method of making a living.

Tell — A change in the player’s behaviour used by others to determine what cards he/she might be holding.

Tough/Bad beat — A high-ranking poker hand that looks like a favourite to win getting defeated by an even superior hand.

Rounders Movie – Where to Watch Online

It’s possible to watch the Rounders movie online through streaming services like Hulu and Amazon Prime Video. It’s also available as a one-time purchase on Apple TV, Google Play Movies, and YouTube, but keep in mind that it’s not on Netflix.

If you want to watch it for free, our advice is to check your local TV guide. Alternatively, you can also sign up for a free 30-day trial of Hulu or Amazon Prime Video.

John Dahl and his team cast actors that truly embodied the various types of player personalities that one can encounter in the poker underworld. You have Matt Damon as the lead role and narrator, with Ed Norton and John Malkovich representing the two other main characters.

If you’re still unsure whether Rounders is right for you, you’re welcome to read our short synopsis. Needless to say, we’re entering spoiler territory here. We won’t divulge the conclusion, but parts of the plot will be discussed.

The film begins with Mike McDermott (Matt Damon), a card-savvy New York City law student, preparing for the game of his life. Mike’s dream is to become a poker pro and make it to the World Series of Poker tournament in Las Vegas.

However, his bankroll is a bit short, so he decides to risk his savings and tuition money in a high-stakes game of Texas Hold’em. Mike goes to an underground gambling den owned by Teddy KGB (John Malkovich), a shady character with connections to the Russian mafia. He challenges the mobster and quickly goes all-in but ends up losing everything.

After his devastating defeat, Mike vows to stop playing and takes the high road by working graveyard shifts and studying during the day. His decision is partly influenced by Jo (Gretchen Mol), his clean-cut girlfriend who’s fundamentally opposed to gambling.

All goes well for a couple of years until Mike’s childhood friend Worm (Edward Norton) reappears into his life. Worm truly lives up to his name: he’s a skilled cheat willing to use every trick to get an advantage in poker. He also owes money and quickly involves Mike in his swamp of a life. Nevertheless, Mike is determined to help his buddy and secretly longs to get back into the game. The talented young rounder is thrust into the world of poker once more. 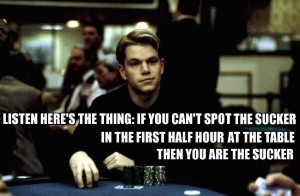 Mike McDermott: If you can’t spot the sucker in your first half-hour at the table, then you are the sucker.

Mike McDermott: You can shear a sheep many times, but skin him only once.

Teddy KGB: In my club, I will splash the pot whenever the f*** I please.

Mike McDermott: If a fish acts strong, he’s bluffing; if he acts weak, he’s got a hand. It’s that simple.

Worm: [referring to Mike’s girlfriend being too strict on Mike] She’s really got him by the balls.

Worm: It depends on the grip.

Mike McDermott: I’ve often seen these people, these squares at the table, short stack and long odds against them. All their outs gone. One last card in the deck that can help them. I used to wonder how they could let themselves get into such bad shape and how the hell they thought they could turn it around.

Teddy KGB: Lays down a monster. The f*** did you lay that down?

Who Stars in the Movie Rounders?

Where Was the Rounders Movie Filmed?

New York City was used for most of the outdoor and indoor scenes. The Rounders film also takes us to Atlantic City and other locations in New Jersey.

What Poker Game Was Played in Rounders?

Mainly high stakes or no-limit Texas Hold’em. However, there are two scenes involving seven-card stud, one of them played according to the “High Chicago” rules (the hand with the highest-ranked spade takes half of the pot).

What Is Teddy KGB’s Tell?

When Teddy KGB has a strong hand, he holds an Oreo to his ear and splits it. When he’s bluffing, he splits the Oreo while looking at it.

Where Can I Watch the Rounders Movie for Free?

You can watch the Rounders movie online for free using a 30-day Hulu or Amazon Prime Video trial. Aside from that, the film is broadcasted by certain TV channels, so feel free to check your local guide. 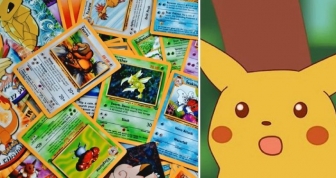 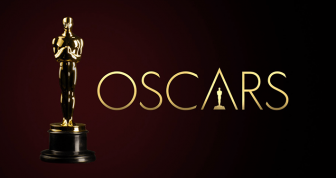 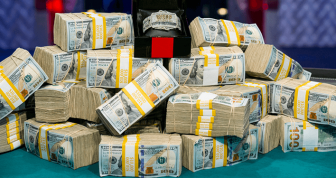