Pragmatic Play is an iGaming software developing company that began its business in 2015. It quickly became popular not only for the variety of games it produced but also for the exceptional quality of its work; which is why to this day, almost every famous casino brand utilises the company’s software. Highly licensed and awarded, this developer continues to expand its already bountiful portfolio, as well as its remarkable reputation among its partners. In today’s article, you will learn more about the best features of this company, and also which are the most famous Pragmatic Play casinos in the iGaming industry!

After performing an analysis of Pragmatic Play’s gaming portfolio, we found out that the developer offers more than 120 games. Naturally, the majority of titles here will be made up of slots; however, Pragmatic has also produced a number of table games, bingo titles, and others. The company is also famous for producing virtual sports solutions. Nearly all Pragmatic Play casino games are also made available in demo versions; however, whether your favourite iGaming establishment will choose to make that available depends on the jurisdiction the casino operates in.

The Crown Jewel of the Developer: Pragmatic Play Slots

It should be mentioned that Pragmatic Play gained its reputation for its original slot titles; however, they will occasionally design and release a game that is based on a popular franchise. Around 90% of the games produced by Pragmatic Play are slots, so it comes as no surprise that they vary in gameplay and design. You can take a look at some of the most popular Pragmatic Play slots below:

Curse of the Werewolf Megaways™

This extremely volatile slot by Pragmatic is one of the most recent and visually beautiful game made by the company. The slot has a special 6×6 reel layout that changes the symbols’ sizes with every spin, providing greater winning opportunities. With an RTP of 96.5% and 46,656 winning ways, this Megaways-licensed slot has free spins, free spin modifiers, and other interesting features.

Eye of the Storm

This Egyptian-themed slot with a 3×5 reel layout is one of the most recent creations of Pragmatic play. It has 10 pay lines and a maximum multiplier of x1,000. While there aren’t many features here, the main one is a progressive free spins feature, followed by several levels of symbol transformations. With an RTP rate of 96.71%, Eye of the Storm quickly became one of the most popular titles of Pragmatic.

A Spartan-themed slot, this game has a 4×5 reel layout and many free spins. With an RTP of 96.6%, this Pragmatic slot is also another highly volatile game, with 40 pay lines. In addition to the many free spins given out by Spartan King, players can expect a win bonus multiplier that can go up to x25.

Pragmatic Play has produced table and card games in the following genres – roulette, blackjack, video poker, and baccarat. The quality of these games is remarkable; however, there is one single caveat – there is only one game per genre. Regardless of the quantity of the table games, their quality is more than satisfying. Here are some highlights from the best card and table games of Pragmatic.

“Roulette” – While there is no direct indication of what type of Pragmatic Play roulette this is, it can be easily discerned that the game is of the European variety. In addition to its simple and clean design, this version of roulette has two interesting features – a “fast mode” that skips the ball roll animation altogether and a marking feature that will highlight all numbers roulette wheel, representing all active bets.

“American Blackjack” – With an RTP of 99.60% and a minor volatility factor, this blackjack title has a luxurious design, and the same fast-play functions present in some of the other Pragmatic Play titles. In addition to the gameplay speed, players can also select the type of voice announcer they want to hear while they are playing this Pragmatic Play blackjack. 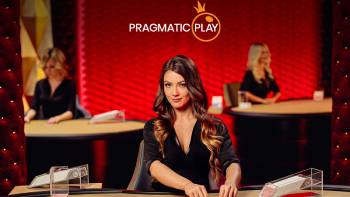 It is only natural that a company that saw rapid growth in its business impresses the iGaming world with something new. In Pragmatic’s case, this was the developer’s newly launched live dealer section that managed to become incredibly popular in record time, lining up next to industry leaders such as Evolution Gaming and Playtech Live. While the games here aren’t as many as the ones offered by other well-established providers, the Pragmatic Play live casino platform is equipped with 4K HD video streaming capabilities, a top-of-the-line studio set, and an expanded array of features.

The live dealer lobby of Pragmatic offers games such as baccarat, blackjack, Mega Sic Bo, and roulette. An interesting fact here is that the live roulette genre is the one with the most different variants. In fact, roulette tables are held in different languages such as German, Russian, Italian, and English and also come in auto and speed versions as well.

Pragmatic Play’s popularity has earned them respect and numerous awards from the iGaming industry. Speaking of licensing, some of the most notable administrations that have granted a legal license to the developer are the United Kingdom Gambling Commission, the Malta Gaming Authority, the Government of Gibraltar, the Romanian National Gambling Office (ONJIN), the Gaming Board for the Bahamas, and many others.

One of the developer’s most notable accolades includes the certificates issued by Gaming Labs and BMM Testlabs. This means that the developer’s gaming software is audited and certified regularly by two of the most notable testing agencies in the online gambling world. You can be sure that the “safety and fairness factor” of each game produced by the developer has been thoroughly proven through many professional inspection procedures.

With more than 10 different iGaming awards, the company has been awarded by events such as the EGR, MiGEA – the Malta Gaming Awards, the GA Awards, the SBC Awards and quite a few other events. Both the iGaming industry and its critics have repeatedly voted Pragmatic Play as a Best Game Vendor, Best iGaming Software Supplier, Best Bingo Provider, and Best Slots Provider!

Pragmatic Play is a company that is often regarded as having a dedicated approach to mobile technology, which is why all of the games they offer are superbly optimised for use with most modern devices that run on iOS and Android. The reason for this superior mobile compatibility is the fact that Pragmatic uses HTML5 as a developing platform for their games, which is why every piece of software produced by the company seems to be running smoothly. Noted, some of the developer’s older titles are still made on Flash, but even they are being re-worked to fit the new HTML standard of the company.

Some Interesting Facts about the Company

This developer has an interesting business history; at first, they started out by producing only RNG games. While the industry still noted the initial quality of their work, things really started to evolve for the company even further when they acquired the former live dealer games provider by the name of Extreme Live Gaming. After the deal was finalised in 2018, Pragmatic Play completely re-branded and upgraded its newly acquired live dealer games platform. Today, Pragmatic’s live games services are known to rival those provided by some of the most famous brands in the sector, such as Evolution Gaming, Playtech Live, and NetEnt Live.

When it comes to gaming features, Pragmatic Play adds their contribution to the iGaming industry with an innovative slot feature called “Drops & Wins”. Essentially, this is a specifically designed mechanism that can be incorporated in the majority of Pragmatic Play’s games and Pragmatic Play casinos, allowing online operators to organise tournaments, set instant prize features, and a number of other interesting mechanics that will increase the engagement factor of the casino members.

Although this company hasn’t been around as long as many other notable developers, it is most certainly one that currently stands with them on the same level of quality. Pragmatic Play’s achievements have earned them numerous accolades and the admiration of competitors such as Evolution Gaming, Microgaming, NetEnt, Playtech, and quite a few others.

Gambling and Care for the Players

As an iGaming software developing company that has been recognised by the leading licensing institutions in the industry, it doesn’t come as a surprise that Pragmatic Play are socially responsible. With that being said, the developer lists the names of some of the most noteworthy organisations tasked with spreading awareness about the dangers of gambling addiction, such as BeGambleAware.

The Pragmatic Play Casino List You Should Check Out

No Pragmatic Play casino list would be completed without names such as LeoVegas, 888casino, Mr Green, Betsson, Casumo, and many others. The company’s incredible reputation, coupled with its remarkable iGaming products and services, makes Pragmatic Play a desired partner for both big and small online casino operators. Here are some quick facts about the most famous online casino brands that utilise Pragmatic Play software.

One of the Best Online Casino Software Makers

Pragmatic Play has often been described as the “best up and coming software and slot provider” in the iGaming industry. The numerous accolades and licenses aren’t the only factors that make this statement true. This developer is successful in so many aspects because they are truly dedicated to creating interesting and original online casino games. If you have the opportunity to try any Pragmatic Play games, you should definitely give them a go!