Released in 2009, Aztec’s Treasure has aged well over the years. So far, it has managed to become both a source of interest and reasonable doubt for punters. And why not? The game features an attractive theme and story (down to the sound), and also even improves your gameplay through some advantageous bonuses. Our review takes you through all of that and even more. Find out now!

What’s the Theme and Story About?

The game focuses on the Aztec empire, or better yet, let’s call them the Triple Alliance. This was an alliance of three Nahua altepetl city-states: Mexico-Tenochtitlan, Texcoco and Tlacopan. As you may be expecting already, all the symbols and icons are native to those three states. Heck, even the background of the slot, shows a thick jungle, with short mountain ranges in the back.

While the experience is the most important part, it’s equally important to know about the different symbols, bonuses, and even the style of reels in use. So, starting with the most obvious, the game’s Wild and Scatter symbols respectively, are the Aztec King and the Golden Idol. Keep in mind that the Wild symbol can also substitute for all other symbols except for the Scatter symbol.

Moving on, you’ll find only one bonus in this game. And it only triggers when you hit a Scatter or two. As usual, the more Scatter symbols you’re able to hit, the better your bonus gets. Like other RTG titles, such as Cash Bandits, Spirit of the Inca, Megasaur, Aztec’s Treasure also uses a five-reel layout, which cascades. In addition to all of this, there’s also a demo mode for players who want a feel for the game. 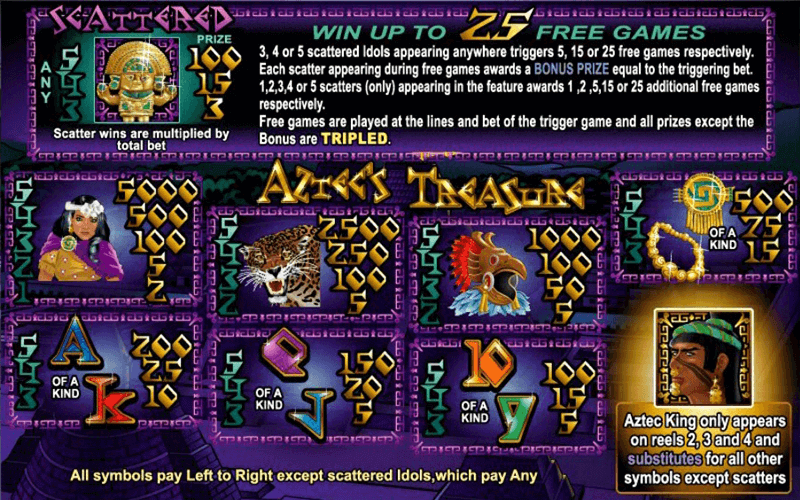 Since it’s an RTG title, most people would assume they would approach the progressive jackpot like they did the others. Fortunately, Aztec’s Treasure’s progressive jackpot is anything but generic. The jackpot triggers arbitrarily regardless of your stake: Albeit, the higher your bet, the better the value of the jackpot.

Here’s what we mean; a regular 5,000-coin jackpot is your reward if you can successfully hit five Aztec Lady symbols. The top prize, on the other hand, is 4,000 points.

Other Important Details about the Game

The game, unlike a lot of other titles, only has 20 paylines. And talking of bets, the bet range isn’t that flexible. The minimum bet is £0.20 while the maximum bet can go as high as £5 per spin. As for the volatility, the game favours very-high rollers. In other words, if your bets are small to medium-sized, you won’t be making any high-value wins anytime soon. So, you’ll have to play at the maximum bet to win the best rewards. The RTP, on the other hand, is a staggering 95%, making Aztec’s Treasure one of the best-valued RTG titles we’ve reviewed.

Every software provider has an Aztec-themed title in their catalogue, so it comes as little to no surprise that Realtime Gaming has one too. But in their case, it’s a retro-style experience where every push of a button or animation is accompanied by a sound (most times, it’s not a discrete one). You’ll have to ignore this nitbit about the game, or better yet, turn off the sound in the settings. The graphics itself is brimming with details, from the native and lush rainforest to the traditional motifs. Other features include the likes of the auto-play option, which can be set from 5, all the way up to 1,000.

Should You Give Aztec’s Treasure a Chance?

Like any other slot game, this one too also carries its incentives and caveat as well. Amongst the former, you’ll find the progressive jackpot, bonus feature, and even in some sense, the story. But as for the cons, the graphics, on a small scale, stands out the most. Compared to some modern titles, it might seem a bit old. But on the plus side, the vintage vibe we get from it is nostalgic.

Unfortunately, Aztec’s Treasure isn’t available on smartphones (regardless if you’re using an Android or iPhone). On the other hand, the game fully supports all desktop devices. And the best thing is that you don’t need to download an app to do that. On any device (even a tablet) running either Windows or Mac OS, you can play through a browser (courtesy of the instant-play option). That said, some top rated casinos do offer the chance to download their catalogue, so you may still find some luck if you prefer to download the game.

What do the symbols mean?

Since it’s a slot, you’ll find a plethora of symbols in the game. They include alphabets and numbers (A, 9, and others form the lower-valued symbols), then the Aztec King, Golden Idol, and even an Aztec Queen. That said, one of the most peculiar things about the King is that as a Wild symbol, it has no value. As for the Idol symbol, it pays in the range of 100x your total bet. The list goes like this; 1, 2, 3, 4, or 5 scatters emerging during the feature will give you 1, 2, 5, 15, or 25 additional free spins, respectively. All prizes, except for the Bonus, are tripled. In the case of the Queen, which is the last what you should look out for. Not only is she pretty, but she also pays a considerable 5,000 x the line bet.

What other areas are lacking in Aztec’s Treasure?

Aside from the graphics and the high volatility, we would have also loved to see some more bonuses than the ones available. One that immediately comes to mind is the win-win feature, but the guarantee feature would have been a welcomed addition as well. Finally, the number of free spins available could be better.