Intro to the Megasaur Slot for Enthusiasts of the Genre

Sure, this isn’t the first dinosaur-themed slot from RTG, but this is the first one to feature a progressive jackpot. The Megasaur slot was released to please players with the thirst for a fun experience, as well as rewards, that sometimes come in the form bonuses. In our review, you’ll discover the different symbols in use, what they mean, and consequently, what you should look out for in the game.

A Dinosaur Theme and Story

As we mentioned, the theme in play here focuses on the prehistoric animals called dinosaurs. So, you have to feed their ravenous appetite, and the better you do that, the more rewards you’ll get. In the game, the types of dinosaurs you’ll find include Triceratops, Pterodactyls, Diplodocus and Velociraptors. While these four are no slouch, the two you need to watch out for are the green Megasaurs and the red Megasaurs. The latter, being even more important than the first.

How to Play Megasaur: Knowing the Symbols, Layout, and Game Style

Playing the slot game becomes extremely easy when you know what each symbol does. Starting with the scatter symbol, look out for the volcanoes. As for the wild symbol, the ones to look out for are the green and red Megasaurs. As for the bonuses, the game has multiple features covering just that sector.

There are two you should be aware of; being the feature guarantee and the win-win feature. In the case of the first, the feature guarantee ensures that you’ll win a bonus regardless of how you play. So, let’s say you haven’t won any bonus yet (by getting some scatter symbols), the guarantee triggers a bonus level when you’ve made 250 spins.

As for the win-win feature, it’s another fail-safe for players who don’t win the bonus round. The feature gives you free points, to be exchanged later. You’ll see the jackpot that can be won at the top of the reels. There are five reels, divided across three rows in the game. Also, there’s an option to play in demo mode. Though, as you might have expected, that entirely depends on the casino where you play. 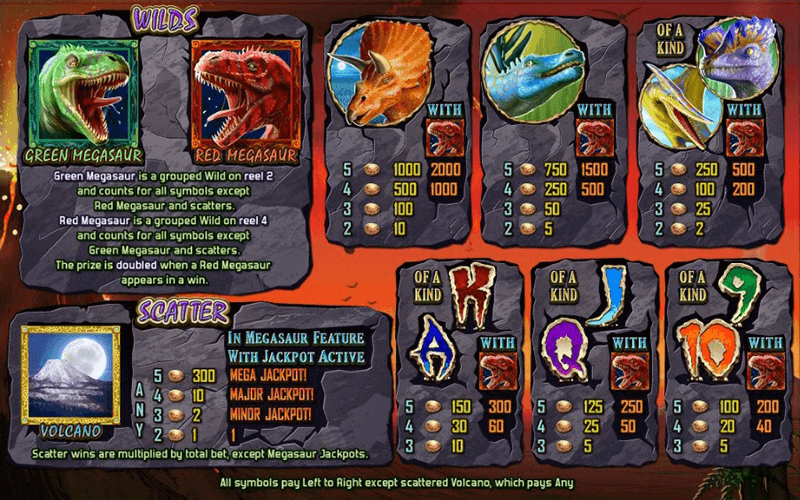 The Megasaur jackpot is a progressive-type jackpot where each consecutive spins contribute points to winning the best rewards. But as you might alt raft now, you have to satisfy some requirements if you want to trigger it. The first is that you need to hit five volcanoes, the second is that you need to spin at the maximum bet.

If you do otherwise, you won’t qualify for the opportunity to win the jackpot. On the other hand, if you don’t hit five volcanoes, your rewards get fewer. The most common reward throughout though, is that you win a percentage of the jackpot. Five volcanoes will give you 100%, four gives you 20%, and three will grant 10%.

Other Vital Info to Know

Being created by RealTime Gaming means that Megasaur has some of the best developers behind it. Graphics-wise, the game features sleek animations; sounds themed to the dinosaur setting and beautiful graphics with a background reminiscent of a jungle (greenery with some birds mixed in). Perhaps the sweetest part of that combo is how the story adds up.

The two symbols demoting Wilds, eat all the other dinosaurs we’ve listed. While this may be a bit grotesque, people that have the stomach for it could double their winning combo. At the top of the screen, you’ll find basic info native to slots (being balance, bet and win).

Why Should You Play Megasaur?

Sure, the game has a progressive jackpot built right into its heart. Still, that doesn’t mean it’s the best we’ve seen. But move on from that, and you should easily be able to see the bright side. That is, the combination of bonus features, or might we say the incentives. Play Megasaur, and be rewarded with the likes of free spins, points and even cash backs. And with a flexible betting range, plus other accessibility options, you can customise the experience according to your tastes.

Which intricacies lay behind the Megasaur symbols?

As you already know, there are a couple of Megasaur symbols for you to keep a note of. And while you may think all of them are dinosaur-themed, it’s the direct opposite. There are volcanoes and even certain alphabets and even numbers (Q, A, 9, J, etc.) in the mix. For the two Megasaurs (red and green), they also have another function. The red Megasaur appears on reel 4, and it can substitute for any other symbol on the reel. As for the green Megasaur, it appears on reel 2, and it can likewise substitute for any other symbol on that feel.

What’s your reward with the symbol combinations and bonus features?

When you hit three scatter symbols, you’ll activate the free spins bonus. At the very least, you should have six free spins to play with. But as you might have expected, the number can increase from that to a staggering 50 free spins (the maximum amount you can win). And all you’re required to do is hit five scatters, with 10 free spins allocated to each one. In the case of the bonus features, the win-win feature credits you x250 of your initial bet if you win 0 during the free spins. If you win x5-x10 of your bet, you’ll get x2-x250 of your bet. Albeit, sometimes, the game skips this cashback process.

Which slot versions are available?

Except if you’ll be playing on a tablet running either Windows or Mac OS, Megasaur doesn’t support smartphones at the time of our writing. It’s only available on desktop, running either of the operating systems we mentioned above. As for the option to download the game, it entirely lies in the hands of the casino. On the one hand, RTG gives you that option, but it’s the casino that decides whether or not their app supports it. Either way, though, you always have the instant-play option (play through a browser).