Review of Spirit of the Inca for Slots Lovers

The Spirit of the Inca is a video slot that was launched by RTG in 2012. While we’re unsure of what our opinions would be otherwise, we’re definitely in love with the theme. Their focus is the Inca civilisation, so all the symbols you revolve around that story. In our detailed review, our objective is to teach you about the features to expect from the game. And hence, how you can play your way through it, by knowing what to look for.

What to Know about the Theme and Story

As we already mentioned, the theme follows the Inca civilisation, so everything is based on just that. From the gameplay alone, it’s already evident. The reels are framed in stone carvings, while the entire thing is set against Inca temples. All-in-all, the adaptation of the theme is pretty well done.

Knowledge You Need to Navigate the Spirit of the Inca

Considering it’s a video slot, all you really need to know lies in the symbols, bonuses at the centre, matrix, and maybe even the type of reel in play. Starting with the first, the Incan warrior is the Wild symbol, and it can substitute for all symbols in the game, including the Scatter symbol.

While we’re on that, the scatter symbol itself comes in the form of Priestess. Other symbols include the temple, a jade Jaguar, a golden serpent ring, a bag of precious stones mixed with chunks of gold, golden bracelet, vase and even a scroll. Moving on to the bonus, whenever you hit two Wilds (specifically on reel 1 & 5) or more, you’ll trigger the formation of the Incan spirit.

The spirit offers you 5, out of 15 bonus symbols to choose from. Your first three picks will most likely reward you with free spins (up to 25), while the rest can reward you with anything between a multiplier, Wild(s), or even nothing. There are 5 reels (cascading), with the symbols arranged in a 3-column format. Finally, there’s also the option to play in demo mode. 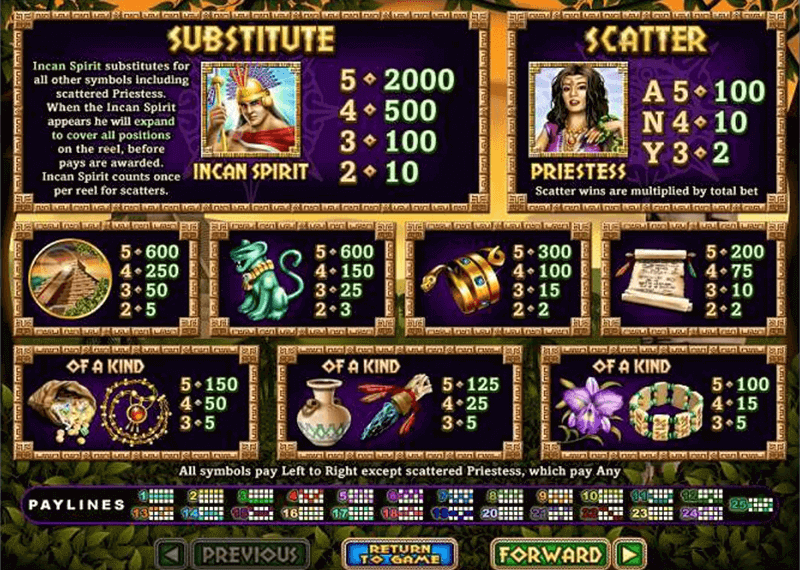 The Spirit of the Inca Boiling Jackpots

The progressive jackpots you’ll find in the game are five in number (termed Grand, Maxi, Major, Minor and Mini), and regardless of your bet amount, you’ll be able to win some of them. Though, keep in mind that each jackpot has a meter, that you must first fill up before you can trigger. The boiling pots you see in the game, are the indicators that we’re talking about.

Now, while we mentioned that you’d be able to win jackpots, it’s still limited to an extent. To really have a chance at all five, you need to play at your maximum bet. But at least, there’s a nifty process that you can get with. The thing rolls over any residue value you’ve accrued unto any next jackpot after you’ve reset the game.

To fill up the meter, you just need to play the game. The more points you acquire, the better your chances at winning the jackpots increases. And while we’re on that, you need to get the Spirit of Inca if you want the best rewards.

Other Vital Info to Know

In the game, there are 25 paylines for you to choose from, and from our experience with the RTG title, our advice would be to bet on them all. As you might expect as well, there’s a bit of customizability at play here as well. The coin size, for example, can be adjusted along with a flexible range (from $0.50 to $5).

As for the game’s RTP, it’s a chunky 95%. While not the best we’ve seen, it’s still up there in the big leagues. That said, the Spirit of the Inca actually spots high volatility. So, while the risk is high, any win is usually worth the trouble. Just keep in mind that the high risk means the game is best for high rollers. Finally, your bets per spin can vary; R4, R10, R18, R28, and R40.

The first thing of note is that the game is both available through instant-play and for download. The only underwhelming nitbit is that the game isn’t available on your smartphone. So, ultimately, you need to decide if you won’t mind playing on a desktop, or at the least, a tablet.

Other features included in the software are the auto-play option (goes from 5 consecutive spins to 1,000), a Help page, and even a game history section. The last incentive we must mention is the sound. Here, there’s a bit of old mixed in due to the theme. So, expect drums, native to the Incan setting.

Still Having a Debate on Whether or Not to Give in to the Game?

Since it’s an RTG game, you can’t just ignore the allure. So, we recommend you at least try out the Spirit of the Inca, win some rewards, and even hit a few jackpots (if you can) on the way out. After a brief experience with the slot, you’ll know if you want to stay and keep playing, or just outright ignore the game. But try to look at the bright side, you have five jackpots available, nice graphics, and a slew of bonus options. Don’t get us wrong though customizability would still have loved to see support for smartphones.

Which rewards should you expect from the Incan symbols?

Well, there are a couple of rewards for you, but as you might already know, they entirely depend on the symbol you end up with. If you get the priestess (at least three of it), you’ll be awarded multiplied wins up to 100x. The more priestess symbols you get, the better the reward.

As for the Incan spirit, it rewards you with coins, ranging from anything between 10 to 2,000. The Incan spirit (Wild) and the priestess (Scatter) are the high-value symbols to look out for. Everything else will also give you the same rewards, but you can expect them in the same quantity.

What are the cons we’ve found in the game?

While we are giving some credit to Realtime Gaming for their impressive work with both the graphics and sound, it’s not all rosy. For one, the sound, while thematic, is oddly repetitive, and in the end, you can get away with calling it boring.

Aside from that, almost all of the game’s best rewards are limited to players who consider themselves to be high-rollers.

What’s the catch to consider if you’re strictly going after the jackpots?

If you remember, we said you’ll be able to win the jackpots regardless of your bet amount. At the same time, there’s a catch that you should know. Try to decrease your bet amount, and one, maybe two of the jackpots won’t be available anymore. This goes back to the pint that the Spirit of the Inca is a game for high rollers.