If you, like us, have been looking to vary up your slots experience, you’ll find out quickly that Cash Bandits is definitely a prime replacement to any game you’re playing. The game was released by RTG (Realtime Gaming) in July 2015, as a bid to introduce a new progressive game to their line-up. Since then, it’s become one of the most popular titles from the studio due to its excellent graphics and sound. Find out what makes the game tick, and thus, how you can prevent unwanted surprises.

The Theme and Story

Cash Bandits’ theme focuses on the other side of the law. So, instead of cracking down on criminals, you’ll be required to hone your safe-cracking skills. That is, this is a game for people who have a side-interest in pulling off bank heists. You just have to line up three or more icons, and you’ll be given rewards in the form of points or free spins.

Features to Expect from Cash Bandits

Playing Cash Bandits becomes easy when you’re familiar with certain details such as the symbols, bonuses, reel types and others. Having said that, let’s start with the first point—symbols. In Cash Bandits, you’ll find symbols such as the robber and police officer, the siren, vault, handcuffs, bag of cash, megaphone speaker, and in a funny twist, doughnuts.

It’s all themed to represent Cash Bandits’ crime theme. As for the actual representation, the Scatter symbol is the Cops & Robbers badge and the vault being the Wild symbol. Keep in mind though, that the vault can substitute for other symbols except for the Scatter symbol. The second point, being the bonus, is tied to the combinations you get in the game.

Ordinarily, Wild (five) and Scatter symbols give you points, but in the case of the latter, you’ll trigger a bonus if you get three or more. The bonus being the vault feature, where you can win free spins. That said, let’s move on to the other points. The game has five reels, divided across three rows. Also, the reels are in a cascading format. Still, our favourite part about this game is that it’s playable in demo mode.

The game has two progressive jackpots, being the major and minor jackpots. Fortunately, you don’t need any particular combination to trigger any of the jackpots. Instead, both jackpots are triggered randomly, though, as you might expect from an RTG title, the jackpots can also be accumulated over some time.

At the end of any spin, you can collect the jackpots. On another note, while every bet you make counts towards the jackpot, you can still manipulate it by increasing your bet amount. In the long-term, the probabilities definitely favour you. You’ll find the two progressive jackpots either at the top or bottom of the slot display.

Additional Info on the Layout

The game’s layout is extremely familiar, especially if you’ve played an RTG game before. That is, there are a couple of features of Cash Bandits that you must know. In this game, you’ll find about 25 paylines, but it doesn’t end there. The game allows you to adjust the bet per line, with a range of $0.01 to $0.25.

This is followed by a flexible coin size range, that varies from 0.01 to 1. Unfortunately, the RTP is unknown, which is a relatively common thing with RTG games. You’ll also find a versatile auto-play button that allows you to choose between 5 and 1,000. There’s also a turbo play button for players who prefer to speed up the experience. 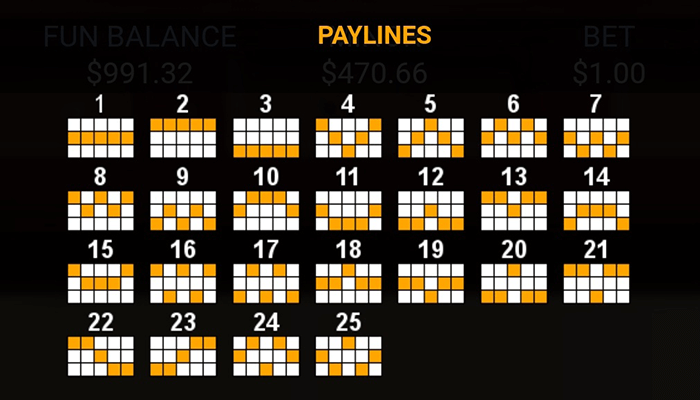 Cash Bandits, being an RTG game, obviously comes with a beautiful design and sleek animations. Not to mention, the sound is very well done. Though, keep in mind that the soundtrack sounds ‘old-school’ to some players. In that case, the game luckily allows you to mute the sound. Cash Bandits is also a game with a low to medium variance.

So while the amount you win won’t be too much, you have a solid advantage in the form of reduced volatility. The software accommodates a help and rules page (contains game history, paytable, etc.) for players who want more information about the game. All-in-all, it’s a slot with a system that you should be familiar with.

Versions of the Game Available

Cash Bandits is fully supported by both desktop and mobile devices, and there’s even an option to download an app. Though, that last part entirely depends on the casino you play at. Regardless of which platform you choose to game on, the experience remains the same. It is seamless so that you can transition from one device to another, and throughout, it remains device-friendly.

Should You Play Cash Bandits?

Cash Bandits is a game with both incentives and lows, but as luck would have it, there are more incentives to play, than lows that’ll push you to ignore it. The game gives players a lot of wins, though they might be small; and likewise, it’s also easy to trigger the jackpot bonus.

What is lacking in Cash Bandits?

While the game doesn’t miss much, that doesn’t mean it’s the best slots we’ve seen in terms of features and experience. One of the things we don’t like about the game is that the help and rules section isn’t the most complete. While it offers some basic information about each jackpot such as the maximum win per spin, game controls, and rules for both the standard game and progressive jackpot, none of these actually cover how you can win the progressive jackpot.

Aside from that, the low volatility also means that the amounts you win will always be small. In certain cases, they can even be smaller than your bet amount. Still, one can also argue that you won’t go through your bankroll as fast as slots with high volatility.

How do the reel symbols work?

Since the theme is a heist, of course, all the symbols will be reminiscent of just that. In the game, you have eight low-value symbols in the form of the money sack, handcuffs, megaphone, doughnuts, a stack of money, gun, the flashing blue police light and the bandits red getaway car. These symbols give you a payout of three symbols or more, on a payline between 5 coins and 500 coins.

There are also high-value symbols, though, as they’re the major ones, they come in at an average three. The biggest one is a bank building, followed by a cop on a walkie-talkie, and finally, the bandit. Whenever you have two or more of these symbols, you win some points (goes from 3 coins, all the way up to 1,500).

What does the progressive jackpot bonus really entail?

As we discussed above, triggering the progressive jackpot bonus is one of the easiest we’ve seen (probably because of the low-medium variance). But what happens after that? Once you trigger the bonus, you’ll first be rewarded with 5 free spins plus x2 multiplier. After which, you’ll be taken to another screen with four vaults and a keypad on each.

Of course, as you might have already imagined, you’ll have to crack each vault to enter them (you’re the heist man after all). For that, a 10-digit pad pops up, with it requiring you to guess the numbers. Successfully crack any of these vaults, and you’ll be given between 5 and 50 free spins, as well as a higher multiplier.