How to Play Green Lantern: Beginner’s Guide to the Symbols and Features

Playtech’s adaptation of Green Lantern was launched as a result of the positive reviews from fans of the book. Following that theme, you play as a member of the Green Lantern Corps. Wherein, your spins can lead you to win anything from the progressive jackpot, to unique free games, where the Scatter and Wild are prevalent. The review shows you the winning combos, symbols, and the different featured bonuses you’ll find in the game.

Interesting Take on the Comic Book

The game is based on the DC Universe’s Green Lantern. It’s your job to defend the universe, and theoretically, the more evil you vanquish, the more rewards you get. In between the fights, though, we did take a look at the scenery. The game is set against a green background to create a sense of flight, while a Corp member levitates off to the side of the reels. As for the symbols, they’re all items you can find in the book.

Fun Fact: The background changes depending on which mission you’re trying to beat.

Details You Need to Know before Playing Green Lantern

Exactly like any other slot, such as Age of the Gods, Spirit of the Inca, Bubble Bubble, the symbols come divided into tiers depending on their value. Indeed, the best symbols you should aim for in a slot are the Scatters and Wilds. Though, in this case, it’s simplified to the ring (bearing the Green Lantern symbol) being the Wild. Add in the ability to substitute for any other symbol including the Scatter, and it’s one of those easily understood games.

That said, there are different bonuses here, but perhaps the most obvious one is the collapsing reels. This, otherwise, means that winning symbols will disappear to be replaced by new collapsing symbols across 5 reels, and 3 rows. So, you can win consecutively again after each spin. There are other bonuses like the Fear Fight Mission, Training Center Mission, and Secret Sector Mission. They give a combination of Wilds and bet multipliers.

Note: There’s a demo mode for new players to try out on almost all top casino sites UK. 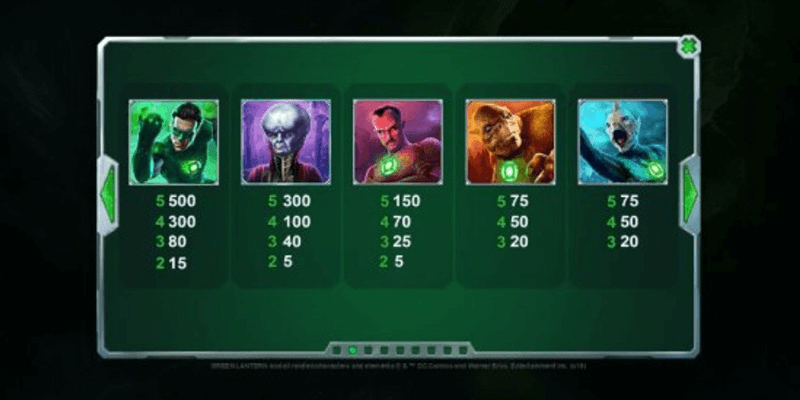 Green Lantern allows you to win up to four different progressive jackpots. They’re called the Mini, Minor, Major and Grand jackpots, and they can be found at the top of the reels. As is the norm, the higher your bet amount is, the better your chances of winning the best jackpots.

Still, perhaps the most exciting part of the jackpots is that they are randomly triggered. Whenever you’re guaranteed to win a particular one, you’ll be entered into the jackpot. Press the grid on display, and you should find meters (red, yellow, blue, and green) representing the different jackpots to fill up. When you’re about to hit the jackpot, 20 symbols will appear, with all of them corresponding to all four jackpots.

Other Gameplay Details to Know

Green Lantern’s biggest highlight is the number of paylines it has. 243 to be exact, but luckily, you can change how many lines you want to bet on. Fortunately, there’s also a flexible bet size range. You can vary your bet amount from 0.01 coin to 50 coins.

Moving on, the RTP of the game is 94.95%, while the volatility is medium-high. In the end, high rollers are the ones who will enjoy the game the most. If not for the number of paylines, then for the different jackpots. 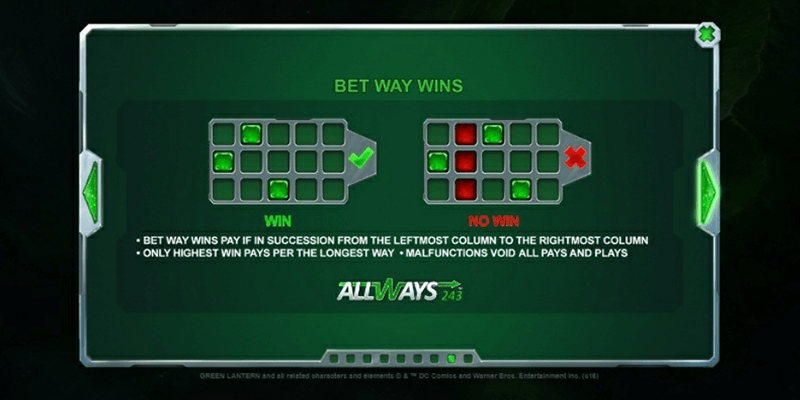 The Graphics and Sound Easily Hold Their Own against Modern Titles

Though it was made some ways back, Playtech certainly did exceed expectations when it comes to the graphics. From the flashy animations made by different Corp members when you win to the overall user interface, the studio manages to immerse you. Likewise, the sound is also well done (has all the blasts down).

Our favourite part of the game is how easy it is to customise your experience. There are options to switch gameplay from your right hand to left hand, depending on your preference. At the bottom of the reels (if you play on your desktop), you’ll find features such as the auto play and turbo mode. The first can be customised up to 99x, while the latter just speeds up your gameplay.

Support for Seamless Gameplay Transition throughout All Platforms

Green Lantern readily runs on any platform of your preference. You can play it on any device supporting Windows, Mac OS, iOS and Android. Also, you can choose to either use the instant-play option (courtesy of HTML5 or Flash) or simply download the game. In our playthrough, we used the former, and the game load-time was pretty short, with the UI entirely polished on the different platforms we played on.

Should You Play Green Lantern?

That entirely depends on you, and your play style. You have to weigh both the incentives and cons and how they affect your style. For some, the availability of four jackpots in a slot is a huge turn on. Others would prefer the other bonuses featured in the game. But at the same time, one can also argue that the jackpot, being randomly triggered, offers no control at all to the players. Because of all this, we would recommend that you play the game first in demo mode, before making a decision.

How does the collapsing feature work?

How do the bonuses work?

The three bonuses are Fear Fight Mission, Training Center Mission and Secret Sector Mission. You’ll be randomly booted to one of the three missions. But we find it better to know what you’re dealing with before choosing anyone.

What are the hidden nitbits to know about the symbols?

Like other slots, Green Lantern has some particular patterns that it follows. To begin with, the Wilds only appear on reels 2, 3, 4, and 5. Even when you get a stacking Wild, you still won’t get a Wild on reel 1. In addition to that, another nitbit is that symbols on the reels are divided into two tiers. High-value symbols are the Green Lantern, Sinestro, Hector Hammond, Kilowog and Tomar-Re. Second-tier symbols include 9, 10, J, Q, K and A.