In 2014, NextGen Gaming released the slot 300 Shields. At the time the game appeared in the iGaming circuit, it made an incredibly positive impression on the online gambling community, effectively solidifying its place as one of the most iconic slot titles of its generation. While the game’s visual design has seen better days, the simplicity of the slot’s gameplay has allowed it to survive multiple trend changes, and remain as a beloved classic to many players. In this 300 Shields slot review, we will not only explain everything about the game, but also discuss why it is present in the portfolios of all top rated casino sites in the UK.

Experience a Legend in the 300 Shields Slot Game

While historians argue about what happened in the battle of Thermopylae in 480 BC, all of them agree that there were 300 Spartan warriors that defended the famous “Hot Gates” pass. The story plot of this slot is clear, and judging by the visual elements incorporated into the game itself, the developer stayed true to the source material as much as possible. Experience the battle of Spartans versus Persians, while trying to land winning combinations!

As a game of “classic” origins, it doesn’t come as a surprise that the 300 Shields slot game has a reel layout of 3×5. Another impressive fact about this slot, is that it has 12 symbols! Two of them are special ones (Spartan Warrior, Shield), four of them are high paying ones (Persian Archer, Ship, Sword, Arrows) and six of them are low paying ones (A, K, Q, J, 10, 9). Although a winning combination can be formed from all of these symbols, it is the special ones that will provide the game with its additional bonus features and mechanics.

Although a successful combination of Spartan Warrior symbols is considered to be the highest paying one in the game, there is much more to it than that special symbol; namely, its wild function. Any time a Spartan is landed on the reels, it will substitute all other symbols (except for Shield).

Landing at least three Shield symbols will make the slot grant five free spins (FS). Because of the fact that these symbols are scatters, they don’t need to be in a special order to grant wins or enable the feature, but even that’s not all. Once FS mode engages, any Spartan Warriors that are part of a winning combination will double their wins! Furthermore, the collection of at least two shields during bonus rounds will retrigger five additional free spins. Although there is no limit to how much FS you can retrigger, the feature is known to be somewhat difficult to enable.

We should also mention that both the initial free spins and any retriggers will be played in a number of stages. The first stage will exhaust the first five free spins that the game has granted. If a player lands more Shield symbols, they will move on to the second stage. Additional scatters will provide more free spins and access to a third stage. After the FS of the third stage has been concluded and no additional Shield symbols have been produced, the game will display the total winnings gathered during the bonus games and return to its normal state. 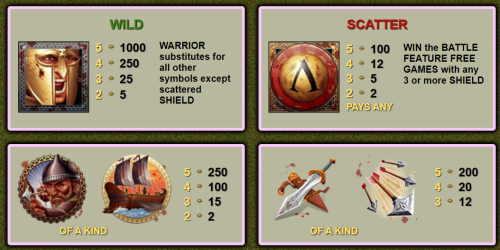 A Maximum Win as Good as a Jackpot

Although the game itself doesn’t provide a jackpot on its own, the maximum win that can happen from the game’s special FS feature can result in a prize of x17,773 a player’s bet. This is an impressive multiplier, and if timed by the maximum bet amount allowed in the game, it will result in a win of £222,162.5

Some of the Basics You Need before You Start

Due to the simplified gaming interface, all you will need to do is set your bet and spin those reels! Bear in mind that although simple, this game has high volatility, which means that winning symbol combinations are expected to form rarely rather than often; however, their rewards will be proportionally larger in accordance with the win frequency in the 300 Shields slot. The RTP of this title is estimated to be 95.299%, which is a bit less than the golden iGaming standard (96%), but it is far superior to that of other games from that time period.

The 300 Shields slot machine has 25 pay lines, which are adjustable. Players can choose how many they would like to play, with the available range being from 1 to 25. Regardless of the number of active pay lines, players will receive the same winnings that have been pre-determined by the lowest and highest symbol combinations. When analysing the lowest and largest, we’ve come to an important conclusion.

If a successful single line combination is made up of three 9s or 10s, it will produce a win of 4 coins; which, if valued at the lowest bet per spin setting (BPS), will produce a prize of merely £0.04. On the other hand, if you score five Spartan Warriors in a winning combo with a max BPS, you will be looking at a reward of 1,000 coins, or £12,500! 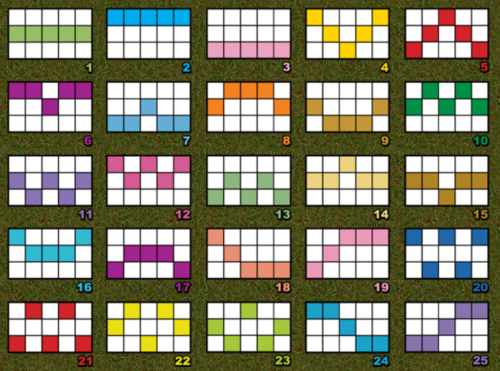 Setting Your Total Bet in 300 Shields Is Easy

Within the game’s settings, there will be two sliders that will control the number of lines you would like to play, as well as the value of the coins within the game. Adjusting them will form your total BPS, and display the amount at the top of the gaming interface. With that being said, the standard wager here will be 1 coin per active line; if you wish to play only on one line on the lowest settings, a single spin would cost you £0.01; however, if you’re feeling confident, a maximum bet per spin for all 25 pay lines will cost you £12.5 per round. 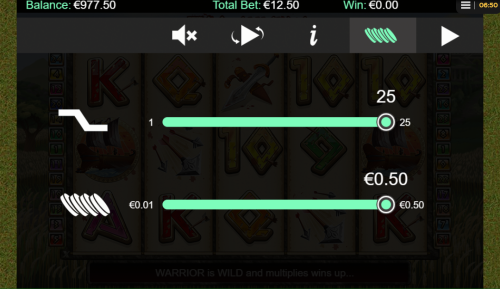 If you would like to introduce an automated element to your gameplay, you can do so via the Autoplay Spins function incorporated in the 300 Shields slot game. Similar to the betting sliders, players can set the game to process at least 5 spins on its own. The number of auto spins on the slider increase by a factor of 5, all the way up to 100. Once your desired number has been set and the game starts running in auto mode, the way to stop it is by hitting the spin button again. Any remaining auto spins will be cancelled, and if you wish to engage the game in auto mode again, you will need to revisit the settings section.

When the game was first created, it was done so on the outdated software platform Flash; however, due to its popularity, NextGen Gaming overhauled it with the use of the mobile-friendly HTML5 platform. This not only allowed the 300 Shields slot to become supported by all types of Android and iOS devices, but also gave it the polished HD look it needed. Not only has this title become one of the most preferred online mobile casino slots, but it also prompted the creation of a sequel called 300 Shields Extreme.

A Slot That May Outlast the Legend

Just like the story it was based on, the 300 Shields slot game seems to be holding its own against the tests of time. It is an all-known fact that after their fifth year of existence, nearly 90% of slots in the iGaming world experience a significant drop in popularity, which is not the case here. The strongest benefit that this particular title provides, is its inherent simplicity and ease of play. Although we would have enjoyed a few additional options when it came to the auto spin function, we still hold the 300 Shields slot machine in high regard. If you do have the opportunity to play it, give it a go!

Is This Game Ideal for High Rollers?

Although the answer to that question is a matter of perspective, the generic answer would be “no”. The game was developed with a relatively low betting range, which is probably due to industry regulations or the high volatility of the game. Either way, the lack of an astronomically high BPS, allows players with low-to-mid budgets to enjoy the game for real money without worrying that they will break the bank.

This slot is developed to be available in demo mode! On the other hand, you need to be aware of the fact that some of the top rated casinos in the UK are restricted from providing demo play on any of the games they represent, meaning that in some online gambling establishments, 300 Shields will be available only for real money gaming.

How Can I Process Spins Faster?

Unfortunately, you can’t. 300 Shields is lacking a turbo-spin mode and also doesn’t provide a way to stop a spin prematurely. This brings down the gameplay speed at approximately one spin per four seconds, and while some might consider it as a drawback, seasoned players are known to enjoy the relatively slow pace of the slot.