Four years after the release of its predecessor, 300 Shields Extreme joined the ranks of the iGaming world in 2018. Although copyrighted by the original developer of the 300 Shields series by NextGen Gaming, this newer version is released by the company SG Digital. In addition to the many things you will learn about the game in this 300 Shields Extreme slot review, we will also discuss its importance to the top rated casino sites in the UK and the rest of the world.

If you’ve seen the popular movie “300” or have read about the legend of the Spartans, the story of this slot is more than clear. Set on Sparta’s beautiful reed backgrounds, the 300 Shields Extreme slot game supposedly entails the legendary battle between the fabled king Leonidas and the Persian army of Xerxes. The slot is constructed with meticulous attention to detail, that can be experienced in glorious HD quality on any type of gaming platform.

Staying true to its classic origins, the 300 Shields slot has a standard reel layout consisting of five reels and three rows. There are 12 symbols in total, which can be classified as special, high paying and low paying ones. Those with the smallest payout rate are the symbols that are based on a standard deck of playing cards (A, K, Q, J, 10 and 9). The symbols with better payout stats (Archer, Sword, Arrows, and Ship) are easily distinguished by their iconic art. The two special symbols that are used for triggering the different bonus features of the game are the Spartan Warrior and the Shield.

It’s more than appropriate that the Spartan Warrior has been assigned as the game’s wild symbol. This means that when a player lands a Warrior symbol, it will substitute any others, except for Shields. In addition to being highly useful, the Warrior symbol is also defined as the highest paying one in the entire game! 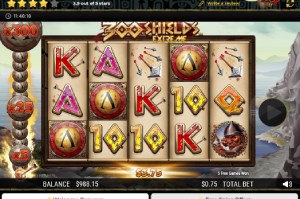 If you want to be given five free spins (FS), all you need to do is hope that a regular spin will land at least three Shield symbols. If you land two of them during bonus round mode, the 300 Shields Extreme slot game will give five additional FS, but that’s not all. Should a winning combination with a Warrior has been achieved during that particular spin, the resulting wins will be multiplied x5 times!

When additional retriggers are granted by the game, they will run in a different “stage”. What this means, is that after the first five FS are concluded, the second stage will begin, if a player has managed to land more shield symbols. There are always additional stages available, and in order to advance further, players will need to land the minimum Shield symbols that are required. Once the final stage has been concluded (if no other retriggers have been initiated), the 300 Shields Extreme slot will dispense a payout, and return the player to the base game.

The Buy Pass Gives You More Control on Your Bonuses

If you don’t want to wait for Shields to appear and give you free spins, you can purchase them outright! The Buy Pass function allows players to instantly access the bonus round mode of the game, starting with 5 FS. The cost for this, is a resounding x60 times a player’s bet. Although this might seem kind of steep, it still provides players with the opportunity of exercising greater control on the slot, which is why many prefer it. Once the bet is paid, the following spin will produce three scattered Shields, effectively engaging FS mode. Bear in mind that if the special feature is “bought”, there will be no winnings from the scatter symbols that engage the bonus rounds.

A Gamble Feature Might Provide You with Additional Wins

One of the newest introductions in the 300 Shields slot game is the gamble (or risk) feature. It essentially allows players to stake their last win on a card-guessing mini-game, which gives a chance to players to double or quadruple their last win! You will notice that the risk mechanic will provide two types of choices – red or black, or one of the four card suits.

If you guess the colour of the card correctly, your money will be doubled; however, getting the right suit of the card, will multiply your winnings x4. Bear in mind that you can make only one choice per round, which means that no matter if you won or lost, the slot would return to its base state. A losing prediction also means forfeiting the win amount you received from the last spin.

A Massive Multiplier Instead of a Jackpot

A lot of gaming critics praise the 300 Shields Extreme slot game for its high win potentials. Although there is no jackpot of any kind, the maximum win that can be granted by the slot is a massive multiplier with a rate of x17,773. When we’ve made the appropriate calculations, we came to the conclusion that the maximum amount of money that can be won in the game is £222,162.5!

Important Specs before Spinning the Reels for the First Time

300 Shields Extreme is a slot with 25 fixed pay lines, and a base RTP rate of 95.299%. On the other hand, the slot has another RTP value of 95.658%, which applies to the Buy Pass feature. It should be noted that 300 Shield Extreme is a game with a high volatility, meaning that you shouldn’t expect wins to land on a frequent basis. When they do, however, they will be substantially better than those of a low volatility slot game. This title is incredibly easy to play, and because of its simple controls and functions, it is ideal for beginners.

Adjusting Your Bets Is Elementary

You can either use the “up” and “down” buttons to adjust the value of your bet per spin (BPS) or use the in-game menu. One of the benefits of having fixed pay lines, is that you only adjust the entire BPS, and nothing else. With that being said, the smallest amount of money you can spend per spin, is £0.25, while the largest – £12.5. The only thing you need to be mindful about here is the state of your BPS, especially if you wish to benefit from a Buy Pass feature. Given the fact that it costs 60 times a players bet, the lowest Buy Pass will cost you £15 (at £0.25 BPS) while the highest – £750!

The Paytable Is Displayed in Coins

Although the game supports various currencies, the paytable winnings are shown in coins. Regardless of the set BPS, the cost of every spin will be 25 coins (one for each pay line). To give you an example – the smallest possible win, is made up of a successful combination of three “9” or “10” symbols, which grants a payout of four coins. If a player’s BPS is £0.25, then the four coins will equal a win of £0.04. Things become interesting when a player hits the highest possible symbol combination of all – five Shields. The reward for this combo is 2,500 coins, and if a player is lucky enough to land it with a maximum BPS of £12.5, they will receive a payout of £1,250!

The Auto Spin feature of 300 Shields Extreme is the same as the one that was present in the previous version of the game. With that being said, the auto function allows players to set between 10 and 100 auto spins. There are no additional or confusing functions that are meant to be tweaked, and if a player wants to disable the free spins, it will be as easy as pressing the spin button again.

Designed with Mobile Use in Mind 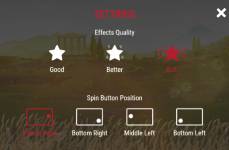 The way the 300 Shields Extreme slot is created, shows us two things; number one, is that the slot is superbly optimised to work with the Android and iOS operating systems. The second factor that solidifies the theory that this game is made to be played on smartphones and tablets, is the game’s customisability. When accessing the in-game menu, players can personalise the way the gaming interface looks by repositioning the slot’s controls to nearly any location on the screen.

Furthermore, the game’s developer has predicted that not all players will use mobile devices with the same processing power, which is why they have included three different quality settings for the effects in 300 Shields Extreme. Reducing the slot’s visual quality will help those who run the game on less-powerful mobile devices. Regardless of the quality settings, however, the graphics in the game are done in glorious HD and are as crisp as any modern video slot that exists today.

This Is Not Only an Upgraded Game

While the “Extreme” version seems like an evolution of its predecessor, it doesn’t cancel it out in any way. 300 Shields Extreme is a more fast-paced game, that features “high-risk-high-reward” elements, which are more appropriate for seasoned players, rather than beginners. With that being said, 300 Shield Extreme is a game in its own right, and if you have the chance of checking it out, do so. Some of the top rated casino sites in the UK even offer it in demo mode!

Why Can’t I See or Access the Buy Pass Feature?

As it is mentioned within the game itself, the Buy Pass feature might or might not be available in every casino that offers 300 Shields Extreme. The reason for that, is that many casinos follow a number of stringent jurisdictional regulations that prevent them from supporting gameplay mechanics that may make a player overspend their budget.

Is There a Quick Spin Setting?

Sadly, there isn’t. However, there is a way to process gameplay faster. After initiating a spin, simply press the same button to halt it. With the use of the “slam stop” manoeuvre, players can go through a single spin (from start to finish) in approximately two seconds.

Which Browser Should I Use for the Best Gameplay Experience?

You can run 300 Shields Extreme with almost every single browser that is currently available online. On the other hand, the developer recommends that players use three distinctive browsers – Google’s Chrome, Mozilla Firefox, and Safari. Although other browsers such as Opera and Microsoft Edge are also able to run the game, Chrome’s graphics processing has been proven to deliver the most optimal experience of all.