Dragon Maiden Slot Review – a Tale of Flames and Fortune

Rescuing an innocent princess from the arms of a dragon is the archetypal hero myth. One can see such storylines everywhere — in novels, comic books, and movies. When we first heard of Play’n GO’s Dragon Maiden slot, we foolishly assumed that it would revolve around this plot.

However, this fable completely flips the script, putting the girl in charge of the mighty beast and giving her the power to make players rich. We will help you win the favour of the fiery Geneth by explaining every detail of the slot. If you’ve chosen to go on a real-money adventure, you should definitely try out the Dragon Maiden slot.

These Are the Dragon Maiden Slot Game Features

The “normal” mode of this title has a standard layout of five reels and three rows. 243 ways are active in the Dragon Maiden online slot, so you’ll win anytime identical symbols appear on 3 or more reels, regardless of their position. Players love this setup, as getting several payouts from a single spin is a common sight.

Geneth, the blazing maiden, acts as the highest-paying symbol. She also has the ability to randomly turn into a Wild that can expand to cover another position or the entire reel. If one of these symbols goes wild, the rest of her clones follow suit.

The multifunctional motif also extends to the dragon-shaped Scatter. If two or more of these tokens appear, they will freeze the reels they’re on and prompt a free re-spin. This process will repeat until no more dragons show up.

Three or more Scatters will send you to the free spins stage of the Dragon Maiden slot. While inside it, landing a dragon on a reel will increase its size by one row, up to six in total. When max height is reached, you’ll win one “Golden Spin”.

These special rounds are also awarded when a Scatter appears on a fully extended reel and occur after the free spins level. But what’s so great about them? Well, Golden Spins give you 7,776 ways to win, as they happen on a layout of five reels and six rows. Needless to say, the biggest cash treasures await there. 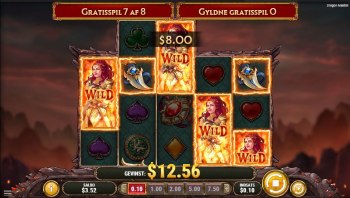 The theme of this game is pretty obvious — girls, dragons, and treasure. Play’n GO hasn’t developed the plot much further than that, so don’t expect a deep backstory or an epic 3D intro video. We’re fine with this approach, as Dragon Maiden is a slot machine and not a novel or a multi-million HBO production.

The Swedish software provider deserves nothing but praise for how this release looks. The graphics are masterfully drawn, and animations run smoother than homemade butter. In the background, one can see mountain peaks, specks of dust shimmering in the sunlight, and even the dragon flying in the distance.

A series of alluring symbols are posing on the scaly reels. High payers are in the shape of jewellery and coin, while their low-value counterparts are depicted as classic card suits. If the Wild or Scatter trigger a special feature, they will come alive through flaming animations.

The musical arrangement of the Dragon Maiden slot could have been easily recorded during a session of some big philharmonic orchestra and sounds just like you’d expect.

New to the Game? Play Dragon Maiden Slot with This Tutorial

Don’t worry if you’re a novice in the world of gaming. Spend a couple of minutes reading this guide, and you’ll become a slots expert. You might have heard that unlocking all the pay lines and features requires you to bet a certain amount. However, in this machine, the full range of functionalities is available at all times so that you can play at any stake.

With that out of the way, let’s focus on the area of interaction at the bottom of the screen. We’ll outline each segment in terms of importance:

Start the Epic Quest in the Right Casino

Many operators offer Play’n GO products, so it’s not exactly difficult to find and play the Dragon Maiden slot for real money. However, if you wish to endure the flaming trials of fate, it would be wise to begin your adventure in the best possible way. We’ve selected five casinos that are not only safe and fair but also extremely generous. Make your choice, and may luck guide you along the way!

If you take a look at the pay table beneath this section, you might think that this is a harmless, low-volatility slot with an unsatisfying jackpot. This illusion is further strengthened by the fact that, on average, one in every three spins yields a win, even if some aren’t that impressive.

In actuality, the Dragon Maiden slot has a tremendous top payout of x5,000 your bet. The “Golden Spins” stage and the rest of the features can multiply your wins and send you soaring through the skies. Although the potential is there, keep in mind that monster wins won’t happen on every play session, which is why this release is considered “high-volatility”. The house edge is 4%, which translates to an RTP rate of 96%.

Here’s a list of the symbols and their payouts:

Geneth sure is pretty, but her whims can be quite dangerous. If you want to find wealth with her by your side, you’ll have to play it smart. Make sure that you can spin at least 70-80 times with the bankroll you have. Then, set a target for how much you’d like to win per session.

Also, never forget to ask yourself what you are willing to lose to get there and stop once that limit is reached. Chasing losses in the Dragon Maiden slot machine — and any other game of chance — is always a terrible idea.

A Mobile Version with All the Bells and Whistles

It doesn’t matter if you’re on a smartphone or tablet, iOS, or Android. Play’n GO crafts its products on HTML5, so the Dragon Maiden online slot plays equally well across all platforms, browsers, and applications.

The layout configuration is different than the one on desktop, as everything but the spin button has been relocated to a single area. It might take some getting used to, but this measure makes it easier to place bets and tweak the settings on a smaller screen.

We might have heaped a lot of praise on this slot, but it’s hard not to, considering all of its strong sides. It boasts smooth animations and charming graphics, innovative features, and thrilling top rewards. You can play it on all compatible devices without sacrificing anything.

Still, the Dragon Maiden slot can bite you with its high variance, so inexperienced players need to approach it with caution. Don’t forget, the demo simulates real-money mode to a T, so spend some time on it to get a good feel for the game. If you decide to chase the mythical treasure, stock up on funds through a worthy casino bonus.