In 2018, the software developer NOVOMATIC released the game Legends of the Seas. Shortly after its release, this marine-themed slot quickly became a fan favourite for its fresh look and numerous gaming features. While some years have passed since this title hit the iGaming “shelves”, many beginners and veteran slot players continue to play it today. Why is this game almost always featured in the portfolios of the top-rated casino sites in the UK? Are the gameplay mechanics here as good as the industry says they are? Our Legends of the Seas slot review tells it all, and then some.

Beautiful mermaid? Check. A muscular ruler with a trident? Check again. The Legends of the Seas slot machine tells the story of Neptune, the Roman god of water and his romance with a beautiful mermaid. While the quality of the visual art style of the game is beyond spectacular, there is a discrepancy that concerns the validity of the source material for the slot!

According to Roman mythology, Neptune’s wife (Salacia) is actually a Nymph; however, by ancient definitions, Nymphs had “human” form, and weren’t fish-like at all. Salacia is often misrepresented in popular art as a mermaid, which could be the case here. However, since Neptune’s name is mentioned and the name of his wife isn’t, we speculate that this mermaid is either a romantic “fling” of the sea god, or NOVOMATIC have decided not to fully adhere to the source materials provided by Roman mythology.

Important Features of the Legends of the Seas Slot Machine

The first thing to mention when discussing this marine slot, is that it has a 4×5 modern reel layout. There are 13 symbols in total – Neptune, Mermaid, Dolphin, Turtle, Sea Horse, Wild, Expanded Neptune, Expanded Mermaid, Embraced Couple, A, K, Q, and J. As expected, some of these Legends of the Seas slot symbols will be used to form prize-producing combinations, while others will engage the game’s additional bonus features. You can check out the game itself in demo mode or for real money in the following casinos: nas apostasBetsson, CasiGO, Vulkan Vegas, Skol Casino, Dunder Casino, Sloto’Cash, Genesis Casino.

Every time you land a Wild symbol on the reels, it will substitute all others, except for any expanded ones. There is no additional function to this wild symbol, which many players consider to be a small drawback. We should also note that during free spins mode, the game will use a different symbol for substituting others, which is why the Wild symbol will be removed during bonus rounds. 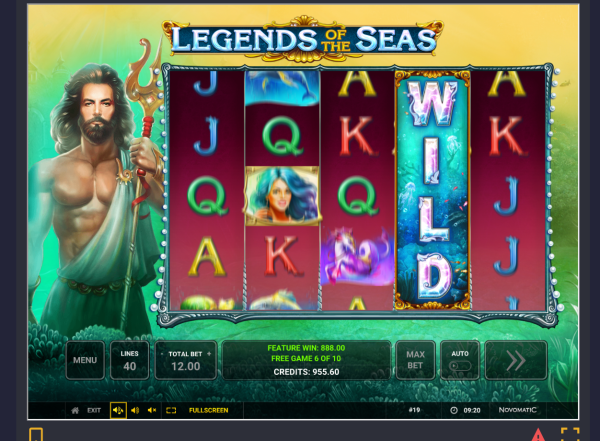 Random Neptune Effects during Base Play

There is a good chance that before a spin initiates during regular gameplay mode, the Neptune statue on the left of the interface will come alive, and cover the slot’s layout with up to 9 adjoining symbols of the same type! The rate at which this effect can trigger and the generation of the symbol type happens at random, and nothing a player does in the game will affect this feature in any way. We should also mention that even if the feature is triggered, it doesn’t guarantee that the spin will produce a winning combination!

The expanded version of the Neptune symbol can occur only on the second reel, while the Expanded Mermaid – only on the fourth. If both of these symbols are landed after a spin, the game will grant the player 10 free spins (FS). During these FS, the background of the slot will change, and one of three distinct features will be enabled before each spin of the reels. The first of them will be the same as the one that has a random chance to activate during base play. Furthermore, regardless of any of the additional Neptune effects, a winning multiplier can be applied for each spin!

The second Neptune special feature is the creation of a full reel Wild! This can happen on either the first, second, fourth or fifth reels. During FS mode, another symbol will be added – the Embraced Couple – which can be landed only on the third reel! If a player is lucky enough to land a Couples symbol, two additional free spins will be awarded, and added to any remaining free spins in your FS counter. The Couples symbol can land only on the third reel; however, there is no limit to how many times the game can retrigger its free spins mode. If you’re lucky enough, you can score FS indefinitely! 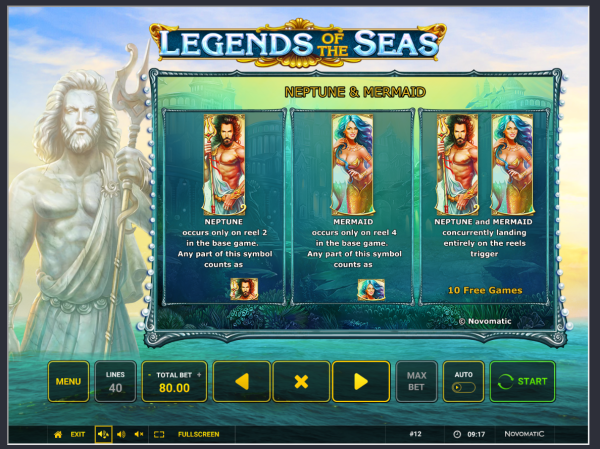 This sea-themed slot is incredibly easy to play; in fact, you simply need to adjust the desired amount of your bet, and you will be ready to spin. Although there is no easily accessible information about the return-to-player rate of the game, we managed to discover that the Legends of the Seas slot RTP is 96.06%! Another thing to mention is the volatility factor of the slot itself, which is listed by NOVOMATIC to be “3 out of 5”, and is classified as “medium” by industry standards.

The slot has 40 fixed paylines, which definitely saves you the hassle of having to adjust them. Winning symbol combinations are formed from left to right, and all paylines will produce a win. With that being said, the lowest win you can score from a single line combination will come from three J or Q symbols, which will yield the player a mere £0.15; however, if you decide to go all out when betting, a combination of five Neptune or Mermaid symbols will grant a win of £400!

What to Know When Adjusting Your Bet

Your total bet, or bet per spin (BPS), can be adjusted by either using the plus and minus buttons displayed on the control interface, or by clicking on the bet number itself. This will bring a table of the entire betting range, with values from £1.20 to £80 – although different online casinos may implement their own numbers. After you’ve decided how much you want to spend per round, all you have to do is hit that spin button. We should mention that if you manage to enable the free spins feature of the game, they will play out with your currently adjusted BPS!

A Pure and Simple Autoplay Mechanic

There is an “auto” toggle switch next to the start button, and if you press it, the Legends of the Seas slot machine will start processing spins by itself. There are no additional settings players can adjust that will stop the autoplay mechanic by itself; in fact, once the auto mode is engaged, the only thing players can do is press the start button, which will stop the reels from spinning! The same applies to changing your bet – if you want to do so, you will need to manually disable the autoplay mechanic first.

The Gamble Feature Has the Potential for More Wins

If you’re feeling luckier than usual, you can stake the win amount from your last spin and engage the “gamble function”. The gamble button will appear after you’ve successfully landed a winning combination. Once you’ve decided to risk your last win, a window will pop up, giving you the chance to choose between two colours – red and black.

After making a prediction, the slot will randomly generate a card; if you’ve successfully guessed it, the Legends of the Seas slot game will double your win! After your success, you can continue guessing and winning up to five times. On the other hand, if you fail to correctly predict the colour of any card, all winnings, including your original ones, will be lost. Keep in mind that the feature might be disabled on the higher bet levels.

If you’re looking forward to playing the Legends of the Seas online slot on a smartphone or a tablet, you will be able to do so easily. The game is developed on HTML5, which makes it fully accessible by all Android and iOS devices! Although there are practically no differences between the PC and mobile version of the Legends of the Seas slot, if you decide to play it in your smartphone, you will notice that the controls are a bit more simplified. Furthermore, you will have the option of switching the layout of the controls from left to right for greater comfort.

As a game that manages to incorporate a number of interesting bonus mechanics, a decent RTP rate, and a wide betting range, the Legends of the Seas slot machine is still one of the first choices for many seasoned players as well as people who have just started discovering the online slot genre. Top rated casinos in the UK and the rest of the world that incorporate games made by NOVOMATIC make sure that Legends of the Seas is present in their portfolios. Whether you want to play the game for real money or in demo mode, we recommend it!

Is the Legends of the Seas Slot RTP Rate Good?

Judging by iGaming industry standards, we have to say that it is! Any game with an RTP of more than 95% is considered to be “above average”. A good indication of that is the year a particular slot was launched. The rule of thumb states that any title released after 2015 has a high RTP rate, as is the case with the Legends of the Seas.

Can I Fine-Tune the Legends of the Seas Slot Autoplay Function?

Unfortunately, you cannot. Although simple, the auto spin function is designed to be as easily operatable as possible, while disabling a number of mechanics. This is done so players won’t be distracted by a variety of other game controlling features that might cause some confusion during intense gameplay.

How Do You Trigger the Legends of the Seas Slot Jackpot?

The Legend of the Seas slot game doesn’t have a jackpot, at least a progressive one. The maximum win that can be produced by the game is x5 of a player’s line bet; however, there’s a bonus multiplier of up to x10 in the free spins stage, and you can win on more than one payline. Thus, wins of x100 your bet or more are possible.