Slots that use “tumbling reels” have been around for a while, but this feature really took off with the premiere of NetEnt’s “Gonzo’s Quest.” When combined with multipliers, this mechanic opens the possibility for huge combination wins that can happen on any spin.

If you’re tired of Gonzo’s smug face and looking to start a new cascading reels adventure, our Jungle Explorer slot review might help you out. We’ve located a Novomatic game that offers exciting features combined with ultra-high volatility. Let’s see what it’s all about!

The Jungle Explorer Slot Has a Familiar Theme 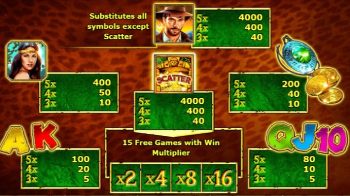 The source of this game’s inspiration is pretty obvious to anyone who’s watched “Indiana Jones.” Everything is centred around an awfully familiar character who’s on a treasure quest in the jungle. Even the font in which “Jungle Explorer” is written emulates the one in George Lucas’ famous film.

Still, we have to say that Novomatic has done a good job of making this imitation visually appealing. The background image depicts the adventurer trying to cross a perilous wooden bridge next to a huge waterfall.

As for the high-value Jungle Explorer slot symbols, they’re represented by the Indy wannabe (Wild), a temple full of treasure, an amazon, an amulet, and golden coins. Even the five low-paying tokens (10, J, Q, K, A) are properly stylised to fit the theme.

Animations are quite smooth, although the speed at which symbols disappear is a bit slower than what we consider optimal. The soundtrack is turned off by default, although you can enable it by pressing the small note icon on the upper-right side. Aside from that, short melodies play whenever a winning spin occurs.

Don’t worry if you don’t know what “tumbling reels” means. We’ll give you a full breakdown of this feature after we cover the basics. For starters, it’s good to know that the Jungle Explorer slot game uses a standard configuration of 3 rows and 5 reels. To win something, you’ll need to spin until a string of 3+ matching symbols lands on the pay lines, starting from the leftmost reel.

The title’s protagonist is the Wild, meaning that it can fill in for all normal symbols and help you get more wins. Meanwhile, Scatter wins are not dependent on positioning, so you’ll win whenever 3+ of them appear anywhere on a single spin.

What Are Cascading Reels?

Once a winning combination appears in standard reel machines, you’ll only see how much you’ve won before you spin again. The Jungle Explorer slot game is different. The symbols that show up on its reels tumble down one by one instead of being placed on a spinning drum.

When you get a win, the tokens that paid you out will disappear, causing those above them to fill the gap and others to appear from the top. As a result, huge chain reactions leading to large accumulative prizes become a possibility. It’s a bit like the gambling interpretation of “Candy Crush.”

Enter the Temple of Wins

Landing 3 or more Scatters is the key that unlocks a special bonus mode in the Jungle Explorer slot. It plays out like the base game, with the exception that combo multipliers are added. All of your wins will be boosted by x2, and if you get a string of 2 or more payouts through the tumbling mechanic, the multipliers will grow.

You’ll get x4 on the second combo win, x8 on the third, and x16 on the fourth and those after it. The free spins stage lasts for 15 rounds, but you can extend it if more Scatters 3-, 4-, or 5-of-a-kinds appear while it lasts.

Novomatic products are known for retaining some old-school functionalities that you won’t see in modern games. One of these is the “gamble” feature, which gives you a shot at increasing your payouts in the Jungle Explorer slot machine.

Usually, this mechanic draws playing cards, and you have to guess the colour of their suit. However, here, you’ll encounter a weird widget with multiple zones. Its bottom segment will start flickering rapidly, and you’ll have to click the “Gamble” button at the right time to double your reward. If you don’t, you’ll lose it all. Still, your chances of success are 50/50. You can gamble your winnings until you reach the 10,000-coin limit.

The Jungle Explorer slot game has 20 paylines that are always active. From our experience, winning spins and combos occur rather frequently and are very common. However, the NetEnt game has multipliers for its normal stage, and this one does not, which increases the house edge.

We can’t give you an official theoretical RTP rate for the Jungle Explorer slot because Novomatic hasn’t stated it anywhere. We searched online, but there were discrepancies between the data, so there’s a big chance that other reviews are just making it up. According to the one UKGC-licensed casino that has the game in stock, the RTP stands at 94%, so we’ll just go with that.

Big wins are a possibility with this release, but to claim them, you’ll need a lot of luck in the free spins stage. Landing a Scatter or Wild 5-of-a-kind with the highest bonus boost results in an x3,200 bet multiplier, which is respectable for a jackpot.

Play with Confidence on Mobile

The latest version of the Jungle Explorer slot was released in 2016 by Greentube, a Novomatic subsidiary. Aside from featuring improved graphics, the game comes with full mobile compatibility and a user interface optimised for smartphones and tablets.

In the portable variant, all of the buttons have been removed from the bottom portion of the screen. In their place, you’ll see indicators for your balance, last win, and current bet. The spin and auto-spin functions have been merged into a single button sitting to the right of the reels. Meanwhile, the paytable, bet settings, and all of the other options are hidden in the menu.

How and Where to Play Jungle Explorer

Novomatic’s “Jungle Explorer” could satisfy your appetite if you’re looking for a slot with an “Indiana Jones” vibe. Its excellent mobile compatibility, high payout potential, and the “tumbling reels” mechanic make it worthy of consideration.

On the flip side, this game isn’t teeming with elaborate features, and its house edge is a bit higher than average. Another problem is availability — Energy Casino is the only reputable and UKGC-approved site that offers the Jungle Explorer slot. This means that you’ll have to create a new account unless you’re already registered with the venue. We did our best to present you with an unbiased review. Now that you know the pros and cons, you can decide whether to go on this jungle expedition.

What Is Jungle Explorer’s RTP?

The game doesn’t have an officially stated Return to Player rate. According to the information we have, it stands at 94%, although some reviews state that it’s as high as 95.7%.

How to Win in Jungle Explorer?

Payouts are awarded when 3 or more matching symbols land on a pay line, starting from the leftmost reel. Scatters grant rewards regardless of their positioning.

The lowest wager accepted in the Jungle Explorer slot game is £0.40, while the highest is £60. Of course, there are plenty of available bets that sit in the middle of this range.