Launched in the distant year of 2009, the Dolphin Reef slot game was considered to be one of the “new breeds” of online casino games that utilised some of the most modern features known at that time. While in the beginning, this aquatic-themed slot seemed to achieve moderate success, after only a few years, it quickly became an “iGaming cult classic” that remains popular even today. In this Dolphin Reef slot review, we will explain what made this game special and which are the traits that make it hold out to today’s industry standards.

The Dolphin Reef Slot Game — The Story of a Bounteous Reef

Storylines in slots were a rare occurrence at the time the Dolphin Reef slot game was created, but that doesn’t mean that there aren’t elements that can be freely interpreted as some sort of a plot. With that being said, the bottlenose dolphin here seems to play the central role of this slot, conversing with a variety of other sea creatures and exploring sunken treasure chests that have been laid to rest on the seabed by unfortunate ships. Although the art style of the slot might seem a bit “retro”, its graphics have still been remade in HD in order to look at their absolute best on any PC or mobile device.

The Streamlined Features of the Dolphin Reef Slot Machine

It doesn’t come as a surprise that the Dolphin Reef slot machine has a standard 5×3 reel layout. There are 12 symbols in total – Dolphin, Treasure Chest, Clown Fish, Turtle, Starfish, Sea Horse, A, K, Q, J, 10, and 9. While the majority of symbols here only serve as a means to form pay line combinations, some of them will serve special functions. If you would like to see them in action, you can play the game in demo mode or for real money in the following casinos: Mega Casino, WildTornado, GSlot, LeoVegas, Vera & John. 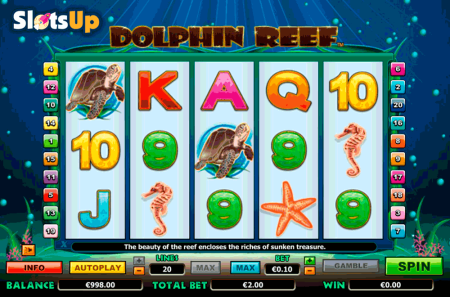 The Dolphin symbol here is referred to as a “substitute” long before the term “wild” came into use with modern online casino slots. In addition to substituting every other symbol in the game, the Dolphin is also the only one that activates a special bonus feature within the game. There is only one small drawback here – the Dolphin wild will appear only on the second and fourth reels.

If you manage to land a dolphin symbol on the second and fourth reel at the same time, the reels will expand fully. Additionally, the game will initiate five respins that will affect the first, third, and fifth reel. A small drawback here, though, is that respins can’t be re-triggered, meaning that you will need to return to base play before engaging them again.

The Treasure Chest is defined as the game’s scatter symbol – which means that as long as you manage to land at least three of them, they will produce a payout regardless of where on the reels they land. One of the best things about the scatter symbol in the Dolphin Reef slot game is that it can be substituted by a wild symbol; however, if it is replaced by a wild reel, it will account only to one (although the wild reel is positioned over 3 symbol spaces). 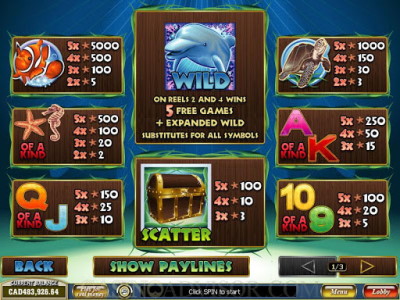 The Dolphin Reef online slot seems to look very simple, although there is a short learning curve on the betting mechanic due to the fact that the game has 20 adjustable pay lines. The game is said to have a low-to-mid volatility factor, which means that you can expect winning combinations to form more often, although they would produce smaller payouts.

The Dolphin Reef slot RTP rate is 95%, which is considered to be low by today’s standards; however, at the time when the game was created, it was defined to be high. When it comes to the lowest and highest paying symbol combinations, they are formed by three 9s and five Clown Fish symbols. Three nines will produce a win of 5 coins, while a successful Clown Fish combination – 5,000!

How to Adjust Your Bet

Adjusting your bet per spin (BPS) will happen after you’ve decided how many of the 20 pay lines you’ve liked to activate. You can choose between 1 and 20 paylines, and once you do, you will have to decide the monetary value of each separate bet line. For example, the smallest amount you can assign to a payline is 0.01 units of currency and the largest – 10 units of currency. With that being said, the lowest BPS in the Dolphin Reef slot is 0.01 and 200 units of currency.

The Simplest Autoplay Mechanic You Will Find

The slots of today usually feature an autoplay mechanic that allows people to choose the number of spins they want to process, as well as adjust a number of function-disable conditions that will stop the feature. On the other hand, the Dolphin Reef slot machine isn’t one of them; however, this doesn’t mean that it’s missing its autoplay mechanic.

In fact, if you want to let the slot play itself for a while, it is as simple as ever – all you have to do is press on the gear icon and then on the autoplay button. The mechanic will immediately start spinning the slot in automatic mode and will not stop until disabled manually.

A PC Slot Re-Made into a Mobile Game

When the Dolphin Reef online slot was created in 2009, it was done so with the use of a software platform called Flash. Due to Flash’s limited capability when it comes to compatibility with mobile devices, the game became unavailable for some time. Because of its persisting popularity, however, the developers remade the game with the superior platform HTML5. This not only made the Dolphin Reef slot game compatible with Android and iOS operating systems but also allowed it to look much better on any gaming platform!

This NextGen Gaming slot game is considered somewhat of an example of how a title from a much older generation can carry on through more than a decade in the iGaming industry and still retain its status among players. While this retro online casino slot does have some drawbacks, those can be quickly dismissed due to the slot’s current age. Although the betting mechanic can be somewhat confusing for first-timers, Dolphin Reef continues to be among the most favourite ones among seasoned slot players. If you have the chance to try it out for yourself, you should definitely do so!

How Fast Are the Spin Animations in the Dolphin Reef Slot?

The Dolphin Reef slot seems to operate at regular speeds, meaning that a standard spin will be processed from start to finish in approximately 3.5 seconds. While the game doesn’t have a “fast” mode, players can utilise the slam-stop tactic (manually starting and stopping a spin) that allows them to process almost four spins in a second!

Do I Need to Activate All the Paylines in the Dolphin Reef Slot?

Not really, as it is a matter of personal preference. Although activating as few as possible pay lines can mean that you will be significantly decreasing the loss rate of your play session, this would also mean reducing the opportunities you can have for forming successful symbol combinations. The most commonly recommended betting strategy for playing the Dolphin Reef slot consists of the activation of all paylines and adjusting a value of 0.01 or 0.02 units of currency.

Where’s the Gamble Feature in the Dolphin Reef Slot Machine?

The currently available version of the game doesn’t seem to possess a “risk mechanic”. In older versions of the slot, you could gamble your most recent win on a card-guessing mini-game for the chance of doubling your prize; however, since the game was remade with the use of the HTML5 platform, the gamble feature was removed.