The Starburst slot is an instantly recognizable classic that reached legendary status not long after it was released in 2012. The game itself not only became one of the most recognizable slot brands in the iGaming world, but also brought significant attention to its creator – NetEnt. Even though this game is more than a decade old, it continues to be featured in the portfolios of the top-rated casino sites in the UK and the rest of the world. Today’s Starburst slot machine review will focus on how the game became so big, as well as its most incredible features.

The Starburst Slot Theme Is a Simple One

This game is clearly designed with simplicity in mind, relying on a theme of colourful gems in a space setting. There is no indication that the Starburst slot has any kind of a storyline or plot, which in this case, is definitely an advantage. The crisp design of the visual theme itself coupled with the smoothly transitioning animations, makes the Starburst slot a pleasure to see, hear, and play.

Explore the Starburst Casino Slot Gameplay and Its Popular Features

The game has a standard 5×3 layout, and a collection of eight symbols in total – Bar, Seven, Yellow Gem, Green Gem, Orange Gem, Blue Gem, Purple Gem, and Star. The gems are considered to be the low paying symbols, while the highest paying ones are the Bar and the Seven. The Star, on the other hand, serves a different function. Once you’ve done with this Starburst slot machine review, you can experience the game for real money or in demo mode in the following casinos: Casumo, Karamba Casino , Mr Green, 888casino.

One of the First Expanding Wild Symbols

The primary function of the jewelled Star is to substitute all other symbols in the game. In addition to this function, once the wild is landed, it will expand on the entire reel, regardless of if it was positioned on the bottom, middle or top part of it. Another interesting perk of the Star is that when it’s landed, it will also initiate a respin while remaining in place in its expanded form. If additional stars are landed during that time, they will also initiate a respin, while the previous ones remain in place.

The wild respin mechanic is widely used today; however, the Starburst slot game is often contributed to being the first one to do it so well. There is only one caveat of the Star symbol, and it is the fact that it can appear only in the second, third, and fourth reel. Last but not least, is the fact that in the best-case scenario, a respin can be initiated only up to three times. 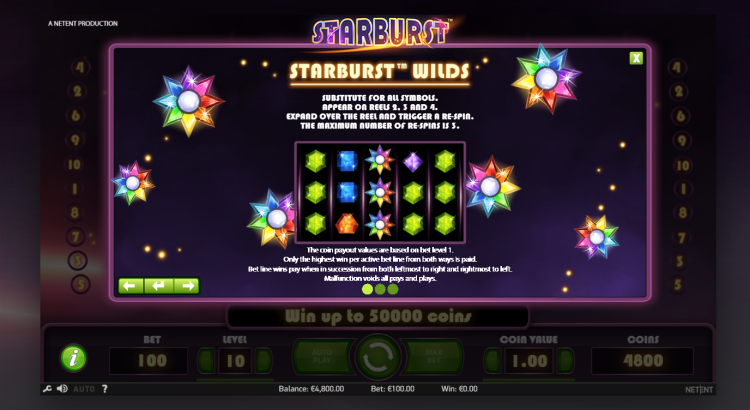 The Formation of the Maximum Win

As a game that doesn’t have a jackpot, the Starburst online slot can provide its players with a single huge win, that is listed to be 50,000 coins. This can occur during a base spin or a re-spin phase of the gameplay. The way this will happen, is if the game lands the first and last reels only with Bar symbols, while the three middle reels are filled with Star wilds.

All of the Starburst Basics You Need to Know About

First and foremost, the Starburst slot is ridiculously easy to play. There are no complicated mechanics to remember, so basically all you would need to do is choose how much money you would like to spend per spin, and hit the spin button. The Starburst slot RTP is 96.09%. Another trait that makes the game special, is the slot’s paylines, which are 10. On the other hand, winning symbol combinations can be formed both ways (from left to right, and vice versa), which means that any 5-symbol combination will essentially pay twice.

The smallest possible payout that can result in the Starburst slot game, will come from a combination of three Purple Gems or three Blue Gems, which will release a prize of only 5 coins. On the other hand, if you’re lucky enough to land five Bar symbols in a winning payline, they will produce a prize of 500 coins. This combination is valued at 250 coins; however, it is multiplied by two times due to the dual payline win rule!

Forming a Bet per Spin Value

The bet per spin (BPS) is basically the total amount of money you plan to spend for a single spin. Since the Starburst casino slot operates with the use of coins, players will be able to formulate their BPS by adjusting the coin amount, as well as the coin value. For example, the lowest possible amount of money you can spend, will be made up by a coin value of £0.01, at a “level 1”. This will result in a BPS of £0.10. If, on the other hand you choose a coin value of £1 at a level 10 setting, the BPS will be £100.

Autoplay – You Can Program the Game to Stop by Itself

Once you navigate to the autoplay function, you can choose between 10 and 1,000 spins to be processed. The Starburst slot game does offer an additional layer of complexity to the mechanic, allowing players to decide when they would like to have the game disable itself. Starburst players can program the game to disable its autoplay mode when a specific amount of money is won or lost, when a single win exceeds a specific amount, or after any win is produced. Naturally, you can also stop the feature manually, by accessing the autoplay menu again. 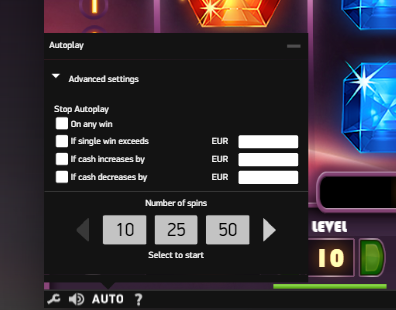 When the Starburst casino slot was released, it was made on a software platform called Flash. Today, iGaming developers no longer use Flash due to its incompatibility with modern mobile systems. NetEnt completely remade the Starburst online slot with HTML5, making it fully compatible with all Android and iOS devices. The mobile version of this title features a custom made interface, which is why the game is also named Starburst Touch™.

Due to the success of the Starburst slot brand, NetEnt released another instalment in the series, called Starburst XXXtreme. Although visually quite similar, the XXXtreme version of the saga surprises its players with a completely different core gameplay. This is brilliantly done by NetEnt, because this way, both Starburst slots have something to offer in their own right.

This Title Will Continue to Be Popular for a Long Time

NetEnt’s philosophical slogan “better games” is most certainly reflected in the Starburst online slot. The title’s simple yet efficient gameplay mechanics permit the player to choose their own approach when they want to experience the game for real money, which allows them to create a unique slot machine strategy. Although the maximum win here isn’t big, the slot is fun, which is the main reason why it is always featured in the gaming portfolios of the top-rated casino sites in the world. If you’re a seasoned player, you already know this game – if you don’t, you should check it out!

Why Is the Starburst Slot So Popular?

The popularity of the Starburst slot game comes from a variety of factors. A lot of the game’s fame is attributed to the number of bonus features in the game, as well as the optimized and responsive functionality of the slot across different platforms.

Are the Starburst Slots Good?

The Starburst series of slots is considered by iGaming critics and players to be some of the best ones in the industry. Their balanced, yet completely different gameplay styles make them preferred by many people to this day.

What Is the Starburst RTP?

NetEnt lists the game’s RTP value to be 96.09%. Leading iGaming critics state that this is an “above-average” rate, which makes the game suited for beginners and advanced slot players as well.

How Do You Win Big on Starburst?

While there is no sure-fire way to guarantee success when playing games of chance, the only thing that might have the possibility of tipping the scales in your favour, is to implement a slot machine strategy. By choosing a low BPS, you will maximize the number of spins you can play, which means that you will have more chances of landing expanding wilds!

What Is the Starburst Maximum Win?