Experts and players agree that NetEnt is one of the finest slot makers of today. The developer has captivated millions with hits like “Starburst” and “Gonzo’s Quest,” yet it can be argued that its branded reel machines are the most entertaining.

If you love the company’s craftsmanship and have a thing for crime series, then don’t miss this Narcos slot review. Here, we’ll acquaint you with the superb features and payouts of the only reel machine branded after the famous Netflix show.

The Narcos Slot Artwork Will Surprise You 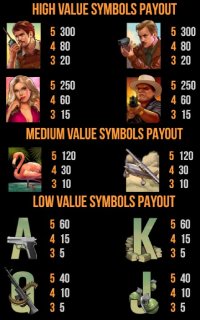 Fans of the series know that Narcos introduced multiple timelines and a large cast of characters throughout its three seasons. Instead of trying to include everything and coming up with nothing, NetEnt has opted to concentrate on the most recognizable personalities and items from the show.

You’ll see Pablo holding a “Catch me” sign, agent Peña and Murphy ready for action, flamingos, babes, and even an aeroplane used to smuggle cocaine. The Narcos online slot has four low-paying symbols (Jack to Ace) that are surrounded by grenades, stacks of cash, and weapons. The wild is a DEA badge, while the scatter is depicted as a muscle car.

The background image is a cityscape of the Colombian city Medellin during the 1980s. You’ll also see some houses and storefronts to the left of the reels. There’s even a phone booth that flashes from time to time. If you tap on it after it lights up, you’ll hear Pablo speaking in Spanish.

What’s interesting is that you won’t see any photos on the reels. The designer team has depicted the symbols with hand-drawn images that are reminiscent of the video game Grand Theft Auto. Now, let’s move on to the meat and potatoes of the Narcos slot game — its features.

Don’t let the game’s unassuming 5-reel, 3-row layout fool you. It’s armed to the teeth with fun functionalities, some of which have been inspired by NetEnt’s most original games.

Let’s take the wild as an example. In addition to its ability to substitute regular symbols, this token can also “walk” across the columns. Simply put, wilds that are a part of a winning combination will remain on the reels, shifting one position to the left until they reach the first column and eventually disappear.

You might remember this feature from the “Jack and the Beanstalk” game, but it’s worth noting that the walking wilds of the Narcos slot machine don’t grant free re-spins while they’re on the reels. Lastly, wild-exclusive 3-, 4-, 5-of-a-kinds are worth as much as the highest-paying regular symbols.

This title presents additional opportunities to get more wilds on the reels and make them “walk.” You have a random chance for a green car to drive by on every spin. When it does, the gunner inside it will open fire on the reels, causing the high-value symbols to spin like a coin. Some of them will remain the same, while others will be transformed into wilds, thus helping you get more winning combinations. 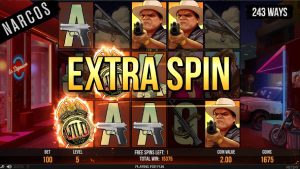 If the Narcos slot produces three “Free Spin” symbols on the first, third, and fifth reels, you’ll be transported to a shootout scene inspired by the end of the show’s first season. You’ll be given 10 spins initially, but the chances are that you’ll be able to extend the bonus for a while.

Why? Because much like the drive-by mechanic, bullets will be flying on every spin, turning some symbols into walking wilds. This level won’t end while there are wilds on the reels, so the appearance of this special symbol can prolong the bonus indefinitely.

Can You Lock Pablo Up?

The last special symbol of the Narcos slot machine is Pablo Escobar himself. When three of his mug shots appear on one row, you’ll enter the “Locked Up” stage. The trio of symbols that started it all will group together and get assigned random values worth between x1 and x10 your wager.

From here, you’ll pay a “cluster pays” game. All the other positions will be emptied, and you’ll receive three free spins. The only tokens that can appear during this level are additional mug shots of the drug baron and a golden suitcase. It’s also possible for the spaces to remain empty.

If “locked up” symbols or suitcases land next to the cluster (diagonals don’t count), it will expand, increase your reward, and reset the free spins meter back to three. The suitcases can contain a larger starting payout, a time bomb that boosts the rewards of tokens in the cluster, or a multiplier that increases the cluster’s value by x2 or x3.

The Narcos online slot features a total of 243 winning ways, meaning that any string of 3+ adjacent matching symbols yields a payout, as long as the sequence begins from the leftmost reel. The only exceptions are Pablo and the scatter, which we already discussed above.

We also have to point out that the betting limits are extremely wide, making the machine compatible with players of all budgets. You can stake £0.20 per spin or put down up to £400. The Narcos slot RTP stands at 96.23%. Considering that the genre average is 96%, you can expect this title to be slightly more generous.

Nonetheless, Return to Player rates are nothing more than a theoretical figure that only comes true after millions of spins. If you don’t plan to play this game for the rest of your life, it’s likely that your sessions will yield vastly different results, especially when we consider that Narcos has a medium/high volatility level. The 300-coin jackpot might seem laughable, but you’ll see much bigger rewards if you get lucky in the two bonus stages.

This game was released in 2019 by one of the top casino developers. NetEnt’s Narcos slot is pretty much guaranteed to run smoothly on any smartphone or tablet released in the past 6-7 years. We tested the game with both iOS and Android phones and can confirm that the payouts, visuals, and features stay the same.

The only difference we spotted is in the user interface. The cool revolver drum-shaped spin button is replaced by a multi-functional icon that sits to the right of the reels. Holding your finger on it will allow you to access the auto-spin function and trigger quick spins on/off. As for bet management and all the other options, you’ll find them hidden in the three-line menu on the bottom-right side.

The Narcos slot game is a crowd-pleaser. Its appealing visuals, above-average payouts, and multitude of thematic features are capable of entertaining fans of the show and slot enthusiasts alike. The slot is nowhere near as bloody as the show, which might disappoint some, but we feel like it was necessary to ensure its broad appeal.

If you’d like to crack down the Medellin cartel and its infamous leader, make sure to partner up with a solid casino. The UKGC-approved sites that we listed in the above paragraph will have your back with solid bonuses, keep your data safe, and always pay you out on time.

How Big Is the House Edge of the Narcos Slot?

We know that the RTP rate of this game stands at 96.23%, meaning that its house edge is 3.77%. In other words, if you bet prudently, you can expect slightly higher returns over the long run compared to your average slot.

As per the paytable, landing five of the top-paying symbols on a single spin grant 300 coins. However, the two bonus levels of this release are capable of much bigger payouts.

Where Can I Play the Narcos Online Slot?

This NetEnt release is available in almost 400 gaming sites licensed by the UKGC. Some of the operators that we’ve reviewed and approved include 888casino, SlotsMagic, Betfred, and Karamba.