Halloween Jack is a slot game that was released in 2018 by the iGaming software developing company NetEnt. As gambling software from the “latest generation”, the Halloween Jack slot game impressed its peers with its incredible form, function, and compilation of gameplay features that are sought after to this day by beginners and seasoned players. In this Halloween Jack slot review, we will fully delve into the mystery of this particular NetEnt title and reveal its secrets to you!

There is a storyline here, and it is as brilliant as it is unnerving. Reminiscent of the writing style of Stephen King, the Halloween Jack slot game features a page that details a haunted jewellery box, which comes into the possession of a girl. Regardless of how many times the girl tries to destroy or get rid of the box, the mysterious item continues to return to its owner. If that wasn’t creepy enough, the girl constantly hears the voice of an entity coming from it, which tells her that if she buries the box next to a special elm tree, he won’t haunt her anymore.

Little did she know that the “voice” has something else in mind. As the girl leaves, the short story is left on a cliff-hanger; however, by experiencing the slot, players will find out what happened to the girl and the haunted jewellery box. Spoiler alert, things don’t turn out well for the girl as she is corrupted by the haunting power, while awaking something much more sinister from the depths! The slot’s art style of the game is nothing short of brilliant and unique; although the graphics were clearly inspired by some of the most popular visual themes in pop culture, NetEnt’s artists have managed to create a truly original piece.

The Outstanding Features of the Halloween Jack Slot

The slot features a standard online reel layout of 3×5; however, this is as far as this title comes close to the most classic way slots are made. Halloween Jack uses a set of 16 symbols in total! Some of them will be active at all times, while others only during base or bonus gameplay. The symbols themselves are Box, Jack Pumpkin, Lantern, Hellhound, Jack-o’-Lantern, Death Reaper, Possessed Woman, Horse, Bat, Raven, Horseshoe, A, K, Q, J, and 10. You can see the Halloween Jack slot symbols in action in the following casinos: Mr Green, Casumo, LeoVegas Casino, Karamba Casino, Videoslots Casino, Rizk Casino, 888casino, CasiGO Casino, Sons of Slots Casino, Jonny Jackpot Casino, Premier Casino.

The Wild Symbol Initiates a Respin with a Twist

If you’ve landed a Jack Pumpkin wild during base play, it will substitute all others with the exception of the Box and Lantern symbols. The Jack Pumpkin is widely regarded as being one of the best “wilds” ever featured in a slot, as in addition to its substitution mechanic, it will also initiate a re-spin! If that wasn’t enough, the pumpkin will also move one space to the left until it reaches the first reel. As long as there is a pumpkin symbol on the reels, the game will continue to produce re-spins.

If the Halloween Jack online slot produces three Box symbols after a spin, the game will immediately grant you 10 free spins (FS). After the game starts its bonus rounds, the Lantern symbol will become active, and will unlock a number of special wild symbols. What is important to note here, is that every wild symbol that appears during base play or in FS mode, will have a walking function! 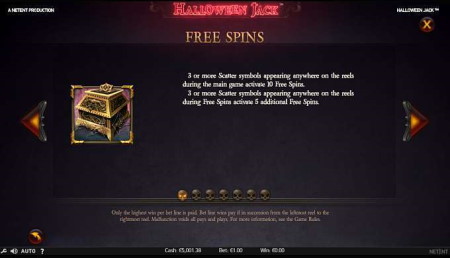 Once you’re in bonus rounds mode, you will notice that on the right side of the screen, there will be three things carved into the black tree – the head of a dog, a pumpkin head, and a skull! Beneath each of these carvings, there will be three circles. Every time a Lantern symbol appears on the reels, a circle will light up, starting from the top. After three circles are successfully lit, the game will put in play the special wild that corresponds to the symbol carved in the tree.

The first one comes in the form of hell hounds. Just like the pumpkin, the hellhounds will serve as wilds; however, they will take two symbol spaces! There is a chance they can be landed fully or partially. Regardless of how they appear, they will still substitute other symbols and move to the left after each spin. Once you’ve landed six Lantern symbols during the free spins mode, the game will unlock the Jack-o’-Lantern which will serve the same function as the Hellhounds. Once you’ve collected nine lanterns in total, the last wild symbol that will be unlocked is the Death Reaper. In contrast to the previous two, the Reaper is guaranteed to cover an entire reel.

The Hallowing Jack online slot is incredibly easy to play. One of the traits that make this possible is the fact that the slot has 20 fixed pay lines! If you want to delve into the horror storyline of this dark game, all you need to do is choose your preferred bet amount and start spinning. The Halloween Jack slot RTP is 96.28%, which is often considered to be quite generous if we were to judge by iGaming industry standards.

Although the volatility factor of the game is listed as “high”, we found that winning combinations were formed quite often; however, playing any slot is a subjective experience, which means that this might not be the case for every player. When it comes to the payouts produced by different symbols, you can expect the lowest to be a product of three 10s. ON the other hand, if you manage to land five Possessed Woman symbols, then you will definitely be in luck! 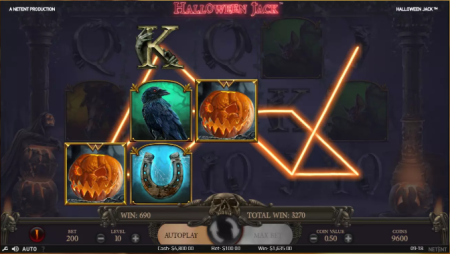 The Bet Mechanic Can Be Confusing at First

The first thing to have in mind when adjusting the value of your Halloween Jack slot bet, is that the game operates in coins. With that being said, there are two things you can adjust – the value of the coins, and the coin multiplier, also known as “level”. For example, if you wish to start playing the game with the lowest amount of money possible, all you have to do is set the game to level 1 and adjust the coin value at £0.01 – this way, your bet per spin (BPS) will be valued at £0.20.

By raising the level, you will also multiply the basic required number of coins that are needed to initiate a spin. If you set the game at level 10, the required coin amount per spin will be brought to 200. In this setting, moving to the highest possible value (£0.50) will create a total bet of £100 per spin! The largest possible win that can be produced by the Halloween Jack slot game, is listed to be 600,000 coins – and depending on how you adjust that value, you will be looking at a payout of either £60,000 or £300,000!

Click on the autoplay button and set your preferences. You can set the Halloween Jack slot to process 10 or 1,000 spins! Once you’ve started the game in auto mode and you want to stop, you can do so manually. If you would like to introduce some diversity to your gameplay, you can also adjust particular conditions that will disable the auto feature for you. They are:

A Game Designed for Use with Mobile Technologies

Whether you have an iOS or Android device, you will be able to play the Halloween Jack slot game. In addition to the exceptional responsiveness of the game on smartphones and tablets, NetEnt have made sure that the slot is fully playable in portrait and landscape mode! The controls of the mobile version are much more simplified, allowing smartphone users to quickly navigate throughout the game’s menus. If you want to have a pleasant experience playing the game on your portable device, make sure your browser app is updated to its most recent version! 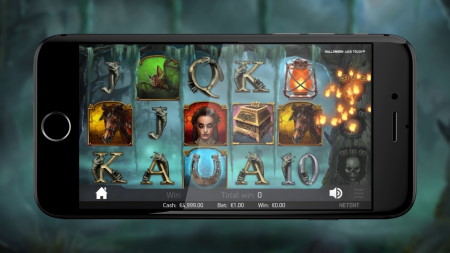 When it comes to the overall balance of the Halloween Jack slot NetEnt did an exceptional job, which is why this title is played today. Immerse yourself in the spirit of Halloween, and you will find out that this slot is very much to your liking! The collection of bonus features combined with the free spins mechanic allows people to get “more for less”. The bottom line is that even trying out the Halloween Jack slot machine in demo mode is a rewarding experience – one that you would like to have!

How Many Times Can I Retrigger the Halloween Jack Free Spins?

Since there is no mentioned limit within the game’s specifications, the slot can retrigger its FS feature an indefinite number of times! On the other hand, bear in mind that the FS feature is notoriously difficult to enable, which means that you might have to play quite a bit before you get lucky.

Can I Make the Halloween Jack Slot Go Faster?

Of course! Once you access the settings menu, you will notice a checkbox field that says, “quick spin”. This will considerably decrease the spin time, but there is one more thing you can do to make spins even faster. Veteran slot players use a “slam stop” tactic, to start and stop the spins manually – which makes the entire gameplay even snappier!

What Is a Good Gameplay Tactic for Halloween Jack?

Bet low 90% of the time. The more balance you have, the more spins you can process. This is vital, especially if you’re hoping to score free spins and re-spins! Even if you don’t get the chance to activate the feature right away, you will still have the balance to keep trying!