The year was 1993 when the popular movie by Steven Spielberg came out in theatres and became an instant hit. While the technology for creating a slot based on it wasn’t yet available, it was in 2014 when the software developing giant Microgaming made that leap and released the slot in the same year.

Although a little bit late to capitalise on the brand’s success, the game managed to carve its own popularity among iGaming fans, and today continues one of the best Microgaming slots ever, as well as a standard title that is featured in the top-rated casino sites worldwide. Read our Jurassic Park slot review, and you might want to try out the game for yourself!

The Jurassic Park Slot Tells the Story of the Movie

Based entirely on the first alliteration of the Jurassic Park franchise, the slot features the adventure of a team of scientists on a pacific island that has been filled with genetically replicated dinosaurs. As expected, every single detail within the game is meticulously crafted to resemble different scenes, characters, and dinosaurs seen in the movie – all of which is done in superb, photorealistic quality.

The entire background scene of the game seems to be alive because it actually is – the constantly moving jungle background gives the player the feeling that they are moving through a dense rainforest while spinning the reels. In addition to the immersive cinematic experience provided by the Jurassic Park slot game, symbol combinations will come “alive”. To top everything off, every time a player scores a significant win (five symbols of a kind), a short video scene from the movie will be shown on the screen, while the resulting winnings are paid to the player.

Explore the Many Gameplay Features of the Jurassic Park Video Slot

The Jurassic Park video slot features a standard layout design, that consists of five reels and three rows. There are 11 symbols in total, and although this doesn’t seem to be a lot by industry standards, they are special in their own way. They are Mosquito, Skeleton Logo, Allan, Ellie, John, Ian, T-Rex, Velociraptor, Brachiosaurus, Triceratops, and Dilophosaurus. Although all of the primary function of each symbol is to produce a payout value, more than half of them will be responsible for triggering the game’s unique features. Read more about them below, or check them out by trying out the Jurassic Park slot in the following casinos: 32Red Casino, BetChain, Casino Lab.

The T-Rex skeleton logo also serves as the Wild symbol in the game, meaning that it will substitute all other symbols, except for the Scatters. Another thing to mention is that the Skeleton Logo symbol can also appear stacked in the base game of the Jurassic Park slot machine! Last but not least is the fact that this symbol also has the second-highest win amount from the entire paytable.

If you see a Mosquito locked in a chunk of Amber, then this symbol is the one you would be hoping to land every single time. The Mosquito symbol is a Scatter, which means that it will provide a player with a win regardless of where it was landed. This is also the highest-paying symbol of the game, but its most important function is to give the player 12 free spins, with one of five different reel modifiers. Although the modifiers will be chosen at random, if a player manages to trigger more than 25 free spins, they will be given a choice to select a preferred reel modifier!

Also called the “Tyrannosaurus Rex Free Spins”, this feature will allow T-Rex symbols to appear stacked on a reel in free spins mode. What is special about it, is that a T-Rex may appear during the feature, and enable up to five reels to become wild! Any reels triggered like that, will make the Jurassic Park slot game provide the player with substantial wins.

If the FS feature of the game has chosen the Velociraptor modifier, then several things will happen. First and foremost, just like the previous modifier, Velociraptor symbols will have a chance of appearing stacked on a reel, but that’s not all.

When a Wild symbol is landed during Raptor FS, it will split into two separate ones. In the case where three Wilds have been divided into six, the game will grant an x2 winning multiplier for a “five of a kind” combination of Wild symbols. Furthermore, there is a chance that every time a Wild is landed, it will add a random multiplier to a winning combo that can have a rate of x4, x5, or x6.

As the designated symbol of this reel modifier, Triceratops symbols will also have a chance to appear stacked on a landed reel. The main trait of this feature is the locking Wilds. For every processed spin, the modifier will place a Wild symbol randomly on any position, and lock it for the duration of the FS. Fully stacked reels will remain in place, while partially stacked will be nudged so they can be fully formed with wild symbols.

Brachiosaurus free spins won’t have a particularly complicated function, but they will increase the value of your winnings exponentially. The Mystery Multiplier™ function will multiply any wins during the free spins at a rate of x2, x3, x4, x5, or x6! This bonus feature will be activated from the first spin; however, it will be enabled only for a random number of spins; also, the Brachiosaurus symbols can appear stacked. Although that might not seem to be a lot when compared to other modifiers, the main advantage of the Brachiosaurus free spins, is that they can be retriggered!

Dilophosaurus symbols can be fully stacked on a reel, but their main function is to randomly turn a symbol after each spin into a Wild. If that specific wild is a part of a winning combination, then it will remain in place until a spin doesn’t produce a win. There is a good chance that the Dilophosaurus will turn a good number of symbols into wilds!

This is a bonus feature that can be activated at any given time on a random basis. Once a T-Rex has been sighted, the game will add 35 extra wild symbols, significantly increasing the player’s chances to score a winning combination. From the moment of activation, “alert mode” will be active for the next 5 spins. If you were to reduce your current bet, it would also reduce the bet value for the duration of the feature. Perhaps one small drawback of the alert feature, is that it can’t be activated during free spins mode.

The RTP & Payouts of the Jurassic Park Slot

The Jurassic Park video slot is incredibly easy to play – all you would have to do is set your desired bet amount and hit that spin button. Having a mid-to-high volatility rating, the game is expected to produce successful symbol combinations rather often than not, which is pretty good, given the fact that the slot doesn’t operate with paylines! Another trait of the Jurassic Park slot machine is that it uses 243 winnings ways to form successful symbol combinations. What this means, is that a valid symbol combo will consist of the same type of adjacent symbols from left to the right.

The Jurassic Park slot RTP rate is listed by the developer to be 92.23%, which by many is regarded to be quite good, especially for a slot that has been modelled after a licensed franchise. Games that are based on movies or popular brands are notorious for having low RTP percentages, but Jurassic Park seems to be one of the few exceptions out there.

Adjust Your Bet & Set the Game in Autoplay Mode Easily

By simply clicking on the coins below the spin button, a window will pop up that will display the different bet values, which are 0.30, 1.50, 2.70, 4.50, 7.50, and 13.50 units of currency. The value of your BPS (or bet per spin) will affect the payout amount that will be produced by different symbol combinations, as well as play a role in any win-producing gameplay feature as well. During free spins mode, only the currently selected BPS will be used, and a player won’t be able to re-adjust the value of their bets, until the bonus feature has concluded.

If you feel like you want to enable the Jurassic Park video slot in automation, you can do so with the autoplay setting located right above the spin button. The smallest number of spins you can toggle is 10, while the largest is 100. Since there are no additional conditions that can be set to disable the feature, you will need to do so manually if you want the slot to stop the autoplay before the pre-programmed spins have run out. 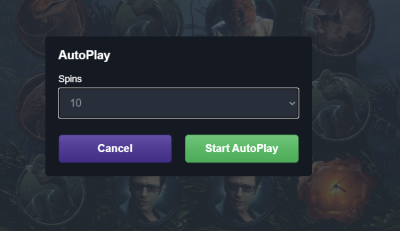 The Jurassic Park video slot is an interesting case when it comes to mobile play. Since the slot was developed during a time when mobile devices weren’t very fast or capable, Jurassic Park ran only on Flash-based PC platforms. In recent times, however, Microgaming had completely remade the slot with HTML5 technology, making it superbly compatible with all modern smartphones and tablets that run on Android and iOS.

In addition to making the visuals even crispier on the HTML version of Jurassic Park, Microgaming have also remade the gaming interface to be much simpler, and mobile-oriented. Furthermore, there is some level of customisation, meaning that you can control whether you want to see the background of the game move or not! If you like the smooth animation and you leave it on, there is only one way it will stop by itself – if the alert mode goes off! If the flashing sign or the stopping background won’t capture your attention, then the giant T-Rex that will walk behind the reels definitely will.

The Form and Function of This Slot Guarantee Its Future Success

There is not a single iGaming critic today that can deny the effort put into developing this game. Every element of the Jurassic Park slot game is filled with tiny details that only make the game even more incredible to experience. It is precisely that special attention to detail, combined with the game’s ample bonus features, makes the Jurassic Park slot popular even today. Given the balanced nature of its betting limits, it’s ideal both for beginners and seasoned players – check it out, and you will see what we mean!

How Will I Be Able to Activate More Free Spins?

After the game has initiated its bonus spins as well as a reel modifier, it might give additional FS during the feature itself. This may or may not happen, which is why the best thing to hope for, is to initially score the Mystery Multiplier modifier, which has a greater chance to be retriggered. With a little luck on your side, you can retrigger FS indefinitely!

Why Can’t I Stop the Autospin Function Whenever I Want To?

This is probably due to the fact that you’re trying to disable it by using the spin button. When the reels are spinning, the start button displays a “stop” symbol; however, this is intended to disable the spin that is currently in progress. If the auto mode is on, it will simply initiate another spin, if the counter hasn’t run out. The way to permanently disable automatic spins is to press on the actual spin counter!

Is There Something I Can Do to Make the Game Enable a Specific Reel Modifier?

Sadly no. The reason for that is that some of the reel modifiers will be naturally preferred by players more than others. This, of course, coincides with the fact that most reel modifiers won’t retrigger free spins, which is why they are chosen completely at random at the beginning of the free spins mode. Once you reached the 25 spins threshold, you will be able to select your own FS modifier!