Considered to be one of the finest slots released by the company iSoftBet, Basic Instinct seems to be a serious slot for experienced players. Featuring a simple design, numerous free spins possibilities and an exceptional jackpot, the Basic Instinct slot game is definitely something special. In this Basic Instinct slot review, you will get the full information about what this game is, as well as answers to some of the most popular questions players have asked about it.

It is more than clear that this game is designed with meticulous detail after the popular movie from the 90s, Basic Instinct. Starring Sharon Stone and Michael Douglas, this thriller crime drama follows the chase between a detective and a suspect in a murder investigation. While the visuals in the game are impressive, the only character people will see here is Sharon Stone’s; probably due to licensing agreements, the character played by Michael Douglas is missing from the game altogether. 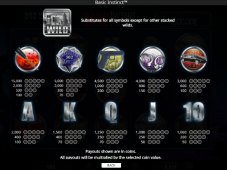 The Basic Instinct slot machine banks on working with a standard 5×3 layout pattern. The game has 14 symbols in total. 10 of them are regular ones (10, J, Q, K, A, Car, Handcuffs, Pistol, Cop Badge, Ice Pick), while the remaining four are the special ones (Wild, Wild Drop, Bonus Wild, and Free Spins Wild).

When it comes to the first wild symbol (Skyscrapers), it is considered to be the most ordinary one in the game. The remaining three are “full reel wilds” (with a size of 1×3) which means that there is a chance for them to cover an entire reel after a spin. While the regular wild symbol takes only a 1×1 space on the reel layout, it will implement a substitute function for all other symbols; however, it won’t affect any of its full reel wild counterparts.

The full reel stacked wild symbols are distinctive, as they not only contain a different Sharon Stone artwork from the movie, but also enable unique bonus mechanics. Bear in mind that each of these stacked wilds will appear on specific reels, under particular gameplay conditions. You can learn more about them below.

The Free Spins Wild Can Be Very Generous

The green stacked free spins wild can appear only on the third reel, but when it does, the player will be in for a treat. If the symbol is landed in full view, it will give the player anywhere from 20 to 50 free spins! The number of free spins is determined at random, but even if you don’t get the full view symbol, the player can still get something out of it. If the full reel symbol is landed only in “partial view”, it will transform to regular wild symbols, which will still provide a substitute function.

The Basic Instinct slot game allows for drop feature wild reels to land on the first, third and fifth reels. Once they do, they will enable their “drop-down” function, and for the following spins, the full reel wild will drop one position every time, with its visible parts transforming into regular 1×1 wild symbols. 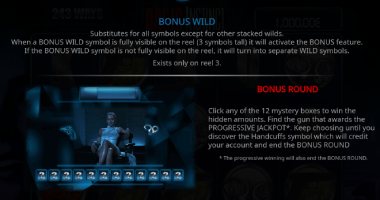 This stacked wild symbol can appear only on the third reel. If revealed in partial view, it will break down into individual wild symbols; however, if you’re lucky to land it in full view, the Basic Instinct slot machine will initiate its bonus round mini-game. Once enabled, the bonus round will show Sharon Stone sitting on a chair, with 12 mystery boxes displayed at the bottom of the screen.

The majority of these boxes will contain instant cash prizes, and a player will pick them one by one, until they’ve hit either the handcuffs symbol or the gun symbol. Finding the handcuffs is considered to be undesirable, as it will disable the bonus game completely. After the bonus feature is completed, the Basic Instinct slot game will add the values of all the prize boxes that have been revealed prior to the end of the bonus game. Getting the gun symbol, will earn players the best prize in the game – the progressive jackpot!

The Jackpot Here Can Be Colossal

Although you can win a significate amount of money by engaging in regular play, it is the progressive Jackpot here that can give you that “life-changing” win. As mentioned above, opening a mystery box with a gun symbol in the bonus game will do it; however, there are a few things you need to know before that. First and foremost, the gun symbol won’t be generated every time – which means that you might open all of them and still receive only the prizes within.

In the case where you get lucky and you’re granted the progressive jackpot, the bonus game will end. What determines the value of your jackpot, is the coin value of your last bet prior to enabling the bonus game. For example, if you’ve bet the lowest amount possible, the jackpot reward will be approximately 1,000 units of currency; however, if you’ve engaged the bonus round with a max bet, you will be looking at a prize of 100,000 units of currency!

The Basic Instinct Mechanics You Need to Know First

Although the game looks simple and easy to play, there are a few things you need to understand as not to get confused. First and foremost, the slot has 243 winning ways, as opposed to the standard “pay lines gameplay” in most of the slots in the iGaming industry. What this means, is that players only need to match adjacent symbols from “left to right” in order to form a winning combination. All winnings will be paid out in coins.

Considered to be one of the best-paying titles in the iGaming world, the Basic Instinct slot machine also features an exceptionally high RTP rate of 97.99%! The lowest-paying winning combination will be formed by three 10’s, while the highest – from five Ice Picks. Another impressive trait of this game is the fact that its volatility factor is listed to be low-to-medium, which means that players can expect winning combinations to be formed rather often!

Given the fact that the game operates in “coins”, there will be some “getting used to” when it comes to adjusting your bet per spins (BPS). In the Basic Instinct slot, the minimum bet per spin will cost 50 coins; however, players can change both the value of the coin and the “bet per way” values. With that being said, the smallest amount of money you can form as your BPS will be 0.50 units of currency. On the other hand, if you set everything to its maximum possible values, you will be able to spend 500 units of currency per spin!

The Auto Spin Function Is Both Simple and Complex

If you want to make the Basic Instinct slot game run in automation, you can use the basic settings and set the auto spin mechanic to run anywhere from 5 to 1,000 spins. If you click on the settings button once the mode has started, you can disable it manually. On the other hand, if you would like to set the conditions under which the auto spin mechanic will disable itself, you can input a loss limit value, a win limit value, and also toggle a switch that will disable the game when the jackpot is won!

Users of both Android and iOS devices will be able to play the Basic Instinct slot game on a mobile device of their choice. What this means, is that iSoftBet has made the game to run flawlessly on any type of computer and mobile device – all that is required of the player, is for them to have a recently updated browser app on their preferred gaming device.

Remaining Successful Because of Its Gameplay and Movie Theme

Whether you’re a fan of that interrogation scene in the movie, or you just love Sharon Stone in general, the Basic Instinct slot machine will definitely satisfy your nostalgia needs. Although the game can be experienced by beginners in demo mode, real money play is recommended for advanced slot players because of the game’s exceptionally wide betting range. Regardless of what kind of player you are, if you enjoy high-stakes slot play, then Basic Instinct might just be the right one for you.

I Am Playing This Game in an Online Casino, but It Doesn’t Allow Me to Place Big Bets – Why Is That?

The Basic Instinct slot machine is truly considered to be a “high roller’s game”, but the number of rich players who can dish out 500 units of currency per spin is significantly smaller. With that being said, online casinos that offer the game with a limited betting range are probably doing so because of jurisdictional regulations which are created to combat overspending.

Can I Retrigger Any Free Spins during Bonus Play?

Unfortunately, the Basic Instinct slot game doesn’t have an FS retrigger or respin functions. On the upside, however, we have noticed that the FS bonus rounds tend to trigger quite often, which is good news for every player.

Will Other Bonus Games Engage during FS Mode?

The answer to the question is “no”, but there is a silver lining to all of that. The Basic Instinct slot machine is special because its wild reel features can trigger in both regular and bonus play!