In 2017, the software developer Habanero created and released another impressive slot to the iGaming world by the name of 5 Mariachis. Its charming and festive theme provided a fresh breath to slot players worldwide, while its bonus features most certainly made a positive impression on all iGaming critics. Although this title was created not long ago, it still manages to retain its popularity. In today’s 5 Mariachis slot review, we will explore every single feature of the game, and answer some of the player’s most frequently asked questions.

Welcome to the Mexican Village of the 5 Mariachis Slot

In pure Habanero fashion, there is not much of a plot here; however, that is purposefully done so players themselves can piece their own story by experiencing the game. The slot loads up to a background of a Mexican desert village, where 5 Mariachis arrive playing different instruments and raise a fiesta for all players and participants alike. Although the slot’s titular five Mariachi characters don’t have any names, their individuality is expressed by the remarkable art of Habanero’s creative art team. The 5 Mariachis slot machine gives players the chance to experience their own Mexican fiesta story, all in glorious HD.

Habanero are a software company that like to introduce classic elements even in their newest titles, which is why the 5 Mariachis slot machine has a classic 3×5 reel layout. One of the most interesting factors about this slot is the number of symbols it has. In principle, there are 12 symbols, two of which are high paying (the Mariachi, the Skull), five are mid paying ones (Tequila Bottle, Mexican Guitar, Chili Pepper, Maracas, Cactus), four low paying ones (A, K, Q, J) and one special one – the Piñata. Another thing that players will notice is that the five mariachi symbols are individually unique in the way they look; however, although they might appear different, they all act as wilds.

The first bonus feature that makes the biggest impression in the 5 Mariachis slot machine allows players the opportunity to win a massive instant prize. Whenever three Piñata symbols are landed on the reels, the player will be prompted to choose one of three piñatas. This feature is designed in such a way, that it will produce a win that will have a value of x2, x3, x5, x10, x50, or x100 times a player’s bet! One of the best things about the Piñata Pick feature, is that it will produce an instant prize regardless of which one you pick. However, you do need to know that one of those three piñatas will provide a larger prize than the rest.

The Skull scatter symbols are special not only in the way that they will produce a successful combination regardless of the positions they land on, but also in the way that they grant bonus rounds. If a player lands three or more Skulls, they will receive 15 free spins (FS). Once in FS mode, the game will start to function with a few additional bonus conditions.

When the game has been initialised in FS mode, there will be one additional special symbol – the Senorita. When a Senorita symbol appears, it will transform to any of the other available base symbols (except for wilds, scatters, and special symbols). Now bear in mind that the transformation mechanics function on a random basis, which means that it might not match the majority of any other resulting symbols.

On the other hand, if a player becomes lucky, the “Señorita” symbols will match any other and produce incredible wins. Another interesting thing that players will notice, is that the 5 Mariachi wild symbols will have a different colour scheme when compared to their counterparts in the base game mode.

The 5 Mariachi Deliver the Best Payout

Every symbol that represents a participant in the Mariachi band will land on a specific reel. Like in regular play, any Mariachi that has been successfully landed after a spin will continue to act as a wild symbol. If all five symbols have been landed in a winning combination, the game will produce the highest symbol combination payout that can be achieved in FS mode.

The 5 Mariachis slot game is one of Habanero’s few titles that feature two different jackpots. The first type (mini) starts at approximately €20, while the second type (grand) starts at around €1,000. Both of these jackpots are of the progressive variety, meaning that the mini and the grand will increase in size, with every processed spin. One of the best things about the jackpot feature of the 5 Mariachis slot game, is that it can be won at random, at any time. There is a “cherry on top” even, and it is the fact that if you win any of the two jackpots, they will be added to all other wins that might have resulted from landing a successful win.

Knowing the Basic Features of The 5 Mariachi

The 5 Mariachis slot game is not complicated to play; however, you might want to know some additional information before engaging in gameplay, though. First things first – the 5 Mariachis slot has 25 fixed pay lines, and an RTP rate of 94.11%, which is considered to be a bit on the lower side, but it isn’t something to be concerned too much about. Since the game has a medium to high volatility, winning combinations are expected to occur relatively often.

With all that being said, the value of every win will be determined by the size of the bet; however, you can expect the smallest wins to be granted by a successful combination of the Q or J symbols, while the biggest prize from the game comes from a winning combo of Mariachi symbols. The largest possible win in the game, is produced by landing all five mariachis – if you’re lucky enough, the game will grant you a win of 500,000 units of currency!

How to Set Your Total Bet per Spin 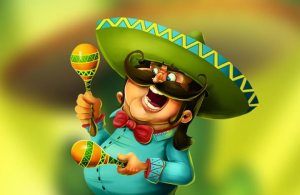 All of the 25 pay lines of the game are played simultaneously, with the use of “coins”. The special thing about that, however, is that a player can adjust the number of bets they would like to place on each separate pay line and how much a coin should be valued. To explain bluntly, the “bet level” settings control how many bets you would like to place on all 25 lines, with a minimum-maximum range between 1 and 10 levels. The value of the coin is determined by the selector on the right side of the game’s interface, and it allows players to choose from 0.01 to 20 units of currency per coin.

By creating a specific selection between these two settings, a player will form their total bet per spin. The lowest BPS possible in the game is achieved at a bet level one and a coin value of 0.01, which will result in a total bet of 0.25 units of currency. On the other hand, the largest BPS that can be formed is 5,000 units of currency (with a bet level 10 and a coin value 20). Another cool feature in this slot is that its paytable is dynamic, which means that it will display the proper values of any potential winnings according to the player’s current BPS.

In true Habanero fashion, the auto spin function comes with many bells and whistles that allow players to better control their gameplay. The minimum number of spins that can be set in auto mode is 10, while the maximum – 500. While you can disable them manually at any time you want, you can also set different conditions in which the function will disable itself.

Mobile Compatibility and Quality of the Visuals

Whether you would like to experience the slot on a PC or any mobile platform, you can do so. The 5 Mariachis slot game is supported by all modern portable devices that run on Android and iOS. Players will notice that there are a few visual differences between the two, mainly in the way the gaming interface looks. On the other hand, the 5 Mariachis slot mobile version of the game is as good and equally entertaining as its PC counterpart. As expected, both the graphics and visual quality of the slot are original and superior to many other slots in the iGaming world. Due to the fact that the slot has vector-based visuals, the game will look equally good on any type of screen.

Remaining as an Iconic Title to This Day

Maybe it’s the fact that the developer bears the name of the most popular Mexican chilli pepper, but Habanero have certainly done something very special with the 5 Mariachis slot game. One of the most impressive things about it is the fact that although the slot has many features and mechanics, the gameplay feels exceptionally balanced. The potential wins here are more than decent, and if you feel like you want to try the game in demo mode, you can do so; after all, some of the top rated casino sites in the UK offer the 5 Mariachis slot within their portfolios even today!

Is There a Chance That I Can Land Piñata Symbols during Free Spins Mode?

Absolutely! The frequency at which the Piñata symbols will appear during any bonus rounds is pretty much the same as the one in the base game. This is also valid for the multiplier range of any potential winnings.

Are the Mariachi Symbols Different in Any Way?

In terms of function, no. The only viable difference between them, is the way they look. Once any of the mariachi symbols are landed, they will display as a “Wild” icon before the game awards any pays.

Can You Activate Any Retriggers or Respins during the Bonus Rounds?

Sadly, the 5 Mariachi slot game doesn’t provide any feature that will increase the number of free spins you will receive. By analysing the way, the game has been developed, we’ve concluded that an introduction of a respin or a retrigger feature would negatively impact the balance of the slot itself.

Is There a Turbo Spin Feature So I Can Process Spins Faster?

While there is no dedicated button on the interface of the game, you can access the settings menu and enable “quick spin”. The game also offers a “semi slam-stop” function, allowing players to stop a spin manually shortly after it has been initiated.

Is There Anything Specific I Should Be Mindful of?

Make sure that you carefully learn how to adjust your total bet. Although some of the top rated casino sites in the UK have a restriction policy regarding high bets in slots, you need to be mindful of the bet level and coin values in order to prevent burning through your bankroll!