A year after the title was released in 2016, the Bonanza slot game was voted as the “most spun slot of the year”. Produced by the company Big Time Gaming (BTG), this game impressed both players and critics with its incredible number of gameplay features. Through Bonanza, BTG introduced a new innovative gameplay mechanic that managed to establish a completely new set of standards for all other slot makers in the industry – which is why this game has such enduring popularity. In this Bonanza slot review, we will fully explore the functionality of the slot, as well as the most optimal ways of playing it.

The Bonanza Slot Game Makes the Player a Prospector

When it comes to the story or the plot of this game, there is none; however, it is the style of the environment that puts the player in a first-person experience as their own hero. The Bonanza slot machine depicts a mountain-like location along with an ore mine. The symbols themselves are modelled after precious stones, making you, the player, a prospector in your own right. You will “mine” your riches by spinning those reels in crisp HD visual quality.

There Are Many Gameplay Features in the Bonanza Slot

The Bonanza slot game is often considered to be the most famous title produced by BTG, specifically due to its innovative 6 reel design and the Megaways™ mechanic that allows symbols of different sizes to be generated by the reels. There are five cascading reels and a single sideways one that delivers four individual symbols after each spin. Speaking of symbols, there are 12 of them. Listed from lowest to highest paying ones, they are – 9, 10, J, Q, K, A, Green Gem, Blue Gem, Red Gem, and Purple Gem. The remaining two symbols are the Gold Bar and TNT.

The TNT is the game’s “wild”, which means that it will substitute any other symbol in the game, with the exception of the Gold Bar. Another thing that should be mentioned is that the wild symbol can only appear at the small horizontal reel that is located above the layout of the regular reels. If it appears, the wild will affect the symbols from the entire reel beneath it! Gold Bars, on the other hand, are the scatter symbols of the Bonanza slot, which will grant free spins if at least four of them are landed.

After the initiation of the free spins mode, a bonus set of gameplay rules will be applied. The first is the increasing “reaction” win multiplier, which grows in size every time a winning combination destroys itself, and other symbols come from above. If you’re lucky enough, this can go on indefinitely, which will astronomically increase the size of any potential reward. Players can prolong their FS gameplay by landing three Gold Bar scatters – which will add another 5 free spins. If they manage to land four of them, the number of added FS will be 10. The only challenge here, is that during bonus play mode, the Gold Bar symbol will appear only in the special horizontal reel.

The First Things You Should Know about the Bonanza Slot

Because of Bonanza’s Megaways™ mechanic, wins will be formed by lining up consecutive symbols regardless of their height (from left to right). A reel can contain as many as seven symbols at the same time, which is why the game has 117,649 winning ways. The Bonanza slot RTP rate is listed to be 96%, while the volatility factor of the game is defined as “mid-to-high”.

We have analysed the lowest and highest possible symbol wins, which brought us to the conclusion that a combination of three 9 symbols will produce a win of only x0.10 times of a player’s BPS. On the other hand, if the player is lucky enough to land six Purple Gems, they will be looking at a win multiplier of x50; which, if calculated at a maximum BPS, will yield a reward of £1,000!

Adjusting Your Bet per Spin Is Straightforward

Given the fact that the Bonanza slot machine doesn’t operate with standard paylines, the only thing a player needs to do is click on the bet adjustment arrows to select the size of their wager. The betting range is accommodating for both low and high rollers – allowing anyone to place a bet as small as £0.20 or as much as £20. All slot Bonanza tips online mention that having a balanced betting strategy is a must, especially if you’re hoping to land as many free spins as possible. Bear in mind that free spins will be processed with the last BPS value you have set. 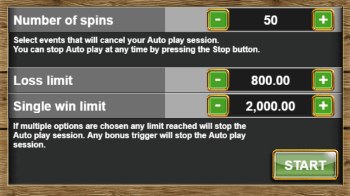 If you would like to have the game “play itself”, you can easily toggle it in autoplay mode. By clicking the auto button, you can determine not only the number of spins you would like to process automatically but also the win limit and loss limit conditions under which the function will disable itself. If you’ve started your autoplay mode and wish to stop right away, simply press the spin button again. The number of autoplay spins that can be engaged in the Bonanza slot ranges from five to 100. Another interesting fact about the free spins function is that its “single win limit” and its “loss limit” values will be calculated to adhere with the size of the BPS set forth by the player.

Optimized by BTG for Use with Mobile Technology

You will be happy to find out that the Bonanza slot game will run on any type of device that can run a browser that supports HTML5 technology. This means that smartphones and tablets running on either Android or iOS will be able to run the game without any challenges. BTG has designed the Bonanza slot gaming controls and interface in a universal way – meaning that you will be comfortable to play Bonanza slot whether you’re running it on a hand-held device or a computer.

Although past Its Prime, Still Highly Popular to This Day

The impression made by Bonanza when it came out impacted not only the players who experienced it for the first time but also the industry as a whole. BTG managed to usher in a new era of slot development with their Megaways™ innovation, which is why every software developing company today are trying to outdo themselves by creating new and interesting slot features. Meanwhile, you can try the Bonanza slot for real money or in demo mode – and witness the game that became one of the brightest examples for slot excellence in the iGaming world.

Where Is the Auto Play Feature?

Although the autoplay function comes built-in as a standard in the Bonanza slot, some jurisdictions may not allow it. If this is the case, casinos will offer the version of Bonanza that doesn’t have an autoplay button.

Can’t I Enable Free Spins by Paying for Them Straight Away?

Unfortunately, that is not possible. While there are quite a few slots that offer the so-called “buy feature”, BTG’s Bonanza slot is not one of them. Obtaining free spins has been defined as challenging because of the fact that the FS mode carries a better potential for granting much larger wins.

Is There a Way I Can Make the Reels Spin and Process Faster?

Sadly, there is no way to do that. The Bonanza slot is already developed to be quite fast, which makes the slot process two full reel spins in approximately 5 seconds. While this may look a bit slower than the spin speeds in other titles of BTG, the reel spin animations are still fast and snappy.