In 2019, the slot Spinfinity Man was released upon the iGaming world. Featuring a quirky theme, a unique gaming interface and a number of useful features, this game quickly became popular among slot players everywhere. Released by none other than the company Betsoft, this game definitely stood out among all the other slots available today, which is why it is prominently featured in the games list of top rated casino sites in the UK. In today’s Spinfinity Man slot review, we will fully explore what makes the game special and provide you with valuable insight into its many features and mechanics.

Save the City in the Spinfinity Man Slot Game

If we are to judge by the overall superhero theme, the plot is pretty basic, but no less entertaining – Spinfinity Man is the resident superhero, tasked with the mission of protecting his city from the evil Mr. X. During gameplay, players will witness the special abilities of both the hero and the villain, all of which will be displayed in crisp HD quality. Although Spinfinity Man is an entirely original character, both his powers and appearance have been inspired by the popular hero Superman. Overall, the visual theme of the Spinfinity Man slot machine is meant to represent a respectful “nod” to the golden age of superhero comics.

The Spinfinity Man Slot Machine Has Many Features

The first thing about the game that makes an interesting impression is the reel layout. This slot has a 7×7 playing grid, and it operates under the “cluster wins” mechanic, meaning that players will need to match four or more symbols horizontally, vertically, or a combination of both, in order to produce a win. The reels in the Spinfinity Man slot online are of the “cascading” kind, meaning that they will drop symbols from above. If a winning combination is formed, it will explode when it grants its win to the player’s balance. When that happens, any remaining symbols will drop down to fill any empty spaces, with additional symbols forming on the very top of the gaming interface.

There are 12 symbols in total, and the slot categorises them as standard, mid paying, high paying, and special ones. The standard symbols are A, K, Q, and J. For the mid-value symbols, there are three types of Crystals – blue, purple, and orange. There is also one more Crystal, that is white – which is considered to be the highest paying symbol in the game. The Spinfinity Man, Mr. X, and Spinfinity Orb symbols are special, and will serve different purposes, depending on the gameplay stage a player happens to be in.

The Spinfinity Man symbol takes 2×2 positions on the gaming grid, and once it does appear, it will enable one of the five bonus features. The first one is “Laser Eye Beam”, which will burn away either two consecutive rows or two columns of symbols, adjacent to Spinfinity Man’s symbol. The second feature, “Double Laser Eye Beam”, is an elevated version of the previous feature; however, in this case, both the rows and columns are burned at the same time.

The third superpower feature is called “Icy Blast”. Once enabled, it will shatter all symbols that surround Spinfinity Man, at a distance of one cell. Just like with the laser eye beam, Icy Blast also has an elevated version, called “Double Icy Blast”, which does pretty much the same thing, but this time at a distance of 2 cells. The last of the superpower Spinfinity Man slot features is none other than “Telepathy”. When initiated, this superpower will remove all single-type symbols from the gaming grid. Any symbols that are burned, shattered, removed or destroyed in any way, will leave empty spaces which will be populated almost immediately by fresh symbols from above.

The first passive bonus feature is called the “Fan Girl”. If a reel spin has resulted in the explosion of five or more clusters, the Fan Girl feature will cause a random number of symbols to explode as well, which will grant instant wins. Bear in mind that this mechanic may trigger only once per spin. We should mention that the Fan Girl feature will be disabled during free spins mode.

Another feature comes from the Spinfinity Orb, which is defined as a “super wild” within the game. It will substitute all other symbols, except for Spinfinity Man and Mr. X. What’s special about the orb, is that it can be a part of bigger clusters and can apply its substitution mechanic to several symbol types at the same time (if applicable)!

During base play, every time a Mr. X symbol is landed, it will contribute to the “villain trail” meter, and then disappear. This will create a single open cell, that will be filled by falling symbols from above. After completing the villain trail, the game will give the player bonus spins, and then engage in bonus mode. The villain trail meter requires ten points to initiate its bonus play, and when a Mr. X symbol is landed, it can grant one or more points.

When the conditions are met, the game will grant the player ten free spins! During the bonus play, landing a Mr. X icon will enable one of five gameplay features. Although they have different names, they will have the same functions as the powers of Spinfinity Man. The most important factor here, is that every Mr. X symbol will also add one more retrigger to your free spins balance.

Basic and Useful Technical Facts about the Spinfinity Man Slot

The first thing we should mention about the Spinfinity Man slot machine, is that it is incredibly easy to play. Due to the fact that the slot operates with cluster wins and not winning ways, gives it almost a limitless number of possibilities of how many symbol combinations it can form. The Spinfinity Man slot RTP rate is shown to be 95.80%, which is considered to be average by industry standards, while the game’s high volatility factor signifies that winning combinations will come rarely but will deliver good payouts. The largest win that a player can score here, is listed to be x5,038 times a player’s bet. If calculated at the highest bet setting, this win will have a value of £50,380.

Adjusting Your Bet Value Is Easy

Setting a BPS (bet per spin) value in the Spinfinity Man slot game is elementary. Simply select a value from 0.10 and 10 units of currency, and you’re ready to spin! We should also mention that when you’ve selected your preferred BPS, viewing the paytable in-game will display potential payouts in accordance with the amount you’ve set as your BPS.

If you would like to try out your luck in a more automated mode, you can do so via the game’s autoplay mechanic. The minimum number of spins you can enable is ten, while the largest – 100. The unique trait in this feature is that you can also adjust the BPS value here as well. After selecting your desired value and number of free spins, the game will display the total cost below.

Double up Your Wins

Although called “Double Up”, this feature is basically a gambling mechanic that gives players the chance to double their most recent win. When a cluster win is paid out, the “double-up” button will highlight, which will enable a “heads or tails” mini game. The players can risk the full amount of their most recent win, or only wager 50% of it. If a player wins the coin toss, they will win double of what they wagered. As long as the player has any funds in their “most recent win” balance, they can continue to double up.

Highly Compatible with All Popular Platforms

Everything from the visual design right down to the functionality of the game itself, has been polished to perfection by Betsoft. What this means, is that besides looking great, the Spinfinity Man slot game will function better than good on any computer (Windows or macOS-based) or mobile device that functions on either Android or iOS. The only difference between the computer and mobile versions of the game, is a slightly modified gaming interface for smartphones and tablets. This is done in order to make the game more comfortable to play on mobile devices. 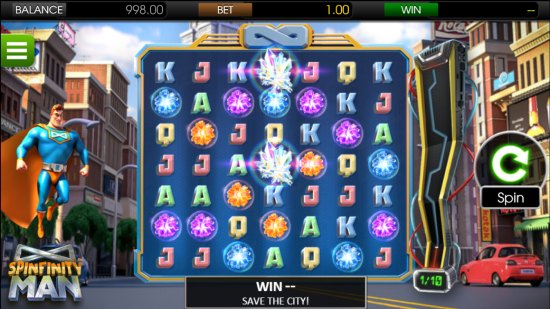 A Fun Slot Ideal for Low and Mid Rollers

Betsoft’s slot games have been regarded as masterpieces by the industry for quite a while now. With that being said, it doesn’t come as a surprise why the Spinfinity Man online slot continues to be one of the most played slots to date. Just like any other game of the same genre, the Spinfinity Man slot has some drawbacks, but they are far too few and insignificant to be considered as hindrances.

Perhaps, its biggest drawback is the fact that the betting range isn’t very broad. While high rollers might be a bit put off by the relatively small bets that can be made, players with a small or medium account balance will find it just fine. While available for real money play, the game has also been released in demo mode – if you can find it, give it a go!

How Do I Cause More Consecutive Cluster Explosions?

You can’t. As a slot game with many random features, Spinfinity Man is a title that relies fully on its RNG algorithm for the formation of all gameplay results. This means that besides adjusting the value of their bets, players won’t have the chance to affect the rate at which the game’s bonus features or mechanics are enabled in any way.

Why Is the Double Up Feature Missing?

There are some cases in which the Spinfinity Man slot won’t have the double up feature. The most common cause for this, comes from specific gambling regulations set forth by jurisdictional authorities. Even the top-rated casino sites are obliged to adhere to any rules and standards set forth by the jurisdictions they operate in, which is why it is possible that in some cases, Spinfinity Man won’t have a double up mechanic.

Is There a Limit on How Many Free Spins You Can Retrigger?

Fortunately, no! If you’re lucky enough to land a Mr. X symbol on every spin during bonus play mode, you can accumulate retriggers infinitely. Although this isn’t specifically mentioned in the game, this particular trait is made to compliment the superhero’s name.

Does the Game Have Any Kind of a Jackpot?

Sadly, no. Due to the fact that there are quite a few gameplay bonus features, the presence of a jackpot will destabilise the slot’s integrity. While there are no astronomical sums to be won here, the maximum win amount can still be considered big.

Where Is the Turbo Spin Mode Located?

Once you navigate to the three lines on the bottom left corner of the gaming interface, you will see a toggle switch, which will allow you to turn the turbo play mode on or off. After examining the speed of both the regular and turbo spin mode, we concluded that there isn’t a feasible difference between the two, with the exception of a much faster spin animation that is present in turbo mode.