Faerie Spells Slot – a Magical Game with Many Winning Opportunities

When Faerie Spells was released in January of 2019, it received quite the attention from the iGaming industry. While the design of the slot itself was more than impressive, it was its many gameplay traits and features that made it famous. Even today, the Faerie Spells slot game manages to hold out to the tests of time, while continuing to be one of the most played titles in the top rated casino sites in the UK and the rest of the iGaming world. Learn a few interesting tips and tricks about one of the best slots made by the company Betsoft, from our Faerie Spells slot review!

Little is known about the actual story of the game, but at the centre of it is the mighty Faerie Queen, whose abilities have the power of changing everything around her, while granting the player many wins. Faeries and pixies are some of the side characters in this fantasy slot gig; however, the focus of the story seems to shift towards the creation of four mythical jackpot vials. The game’s visuals are represented with stunning artwork, the effect of which is even further amplified by the slot’s HD graphics.

Many Features and Symbols in the Faerie Spells Slot 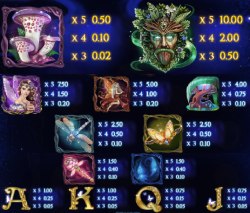 Although the Faerie Spells slot machine features a classic reel layout of 5×3, everything else in terms of features and function is quite modern. Take the symbols for example; first of all, two sets of them are used during different stages of the gameplay. The ones in the base game are – A, K, Q, J, Forest Spirits, Rose Staff, Crown, Dragonfly, Willow Tree, Brown Pixie, and Purple Faerie. There are three additional symbols that serve special functions – the Magic Toadstool, the Forest Ent, and the Faerie Queen.

The Magic Toadstool grants an instant cash prize when it’s activated, while additionally awarding a line win. On the other hand, in order for that to happen, a Faerie Queen symbol needs to be present on the reels so that can happen. The Forest Ent is the designated wild symbol within the Faerie Spells slot, which means that it will substitute any other symbol, except for the Magic Toadstool and the Faerie Queen. It should also be mentioned that the different features within the game will be enabled by landing specific symbol combinations.

Purchase as Many Free Spins as You Want

Every time you manage to land three Faerie Queen symbols, the slot will grant you five free spins. For every additional symbol, you will receive five more spins, with a maximum limit of 25. If you don’t want to wait for Faerie Queens to land, you can use the “buy feature”, and instantly trigger 25 free spins. Bear in mind that the cost of this feature will be determined by the current value of your bet per spin (BPS).

A Different Set of Symbols

Once the free spins round has been initiated, the Faerie Spells slot machine will be transformed. Not only will it display a reel layout of 5×4, but it will also have a unique set of seven symbols – Copper Coin, Silver Coin, Gold Coin, Gold Bar, Green Gem, Red Gem, and the Scatter Diamond. During FS mode, winnings will be paid left to right. If a Scatter Diamond appears on the reels, it will grant a win and then destroy itself – allowing additional symbols from above to drop down and form more combinations.

The Faerie Spells slot jackpots are one of the main selling points of the game. Ranked from smallest to largest, they are – Plenty, Luxury, Wealth, and Riches. Approximately, their starting values will be £11,000 (for Plenty), £37,000 (for Luxury), £63,000 (for Wealth), and £91,000 (for Riches). In order to win any of these jackpots, the player will need to collect a specific number of jackpot symbols. The ordeal is called the “Jackpot Trials”, and it is represented by the four empty vials which are displayed on the left side of the gaming interface.

Each time a player lands a Jackpot symbol, it will be collected in its appropriate vial. If the player is lucky enough to score the required quantity of symbols, they will be awarded the jackpot that corresponds to the filled vial. Just like the Scatter Diamond, jackpot symbols will explode, causing other symbols to cascade down and create new combinations. Here are the symbol amounts that are required for enabling the different jackpots:

Multiply Your Winnings with the Faerie Spell Double Up Feature

If you feel like luck is on your side, you can wager your most recent win from a spin and play a game of heads and tails. The version of Betsoft’s risk mechanic is often considered to be the best in the iGaming industry, as it gives the player a chance to wager only 50% of what they won; this way, they won’t have to lose everything if their coin toss prediction isn’t correct. There are no feature limits that are pointed out, meaning that as long as you still have the funds from your most recent win, you can risk them as many times as you like.

Explanation of the Basic Features of the Game

In its main gameplay mode, the Faerie Spells slot features 10 paylines; however, in free spins mode, the slot will have 1,024 winning ways. The volatility factor of this game is often described as being “low-to-medium”, which means that wins with small values will be granted more often than not. When it comes to the Faerie Spells slot RTP rate, it is 96.03% – which is considered to be quite good by industry standards.

This game is exceptionally easy to play, even though at first glance, the presence of so many buttons can be a bit confusing. Although the jackpot amounts are quite large, the biggest single win that can be won during the base game is approximately £10,000. At the lowest BPS, the smallest win that can be won in the Faerie Spells slot is formed by a combination of three J symbols, which will award £0.50. On the other hand, a maximum total on a successful winning line of five Purple Faerie symbols will yield a prize of £750!

Setting Your Gameplay Bets Is Effortless

Because the paylines in these games are fixed, the players will be able to adjust the amount of their wager in total, basically forming their BPS. The smallest BPS value in this game is a mere £0.10, while the largest – £10. The set value of your BPS will determine the size of any awards you will receive from successful symbol combinations, as well as the price of the free spins in the buy feature.

If you would like to play Faerie Spells slot in a more automated manner, you can do so by using the appropriate function. Like most games of Betsoft, this one also features a complex autoplay mechanic, allowing players to choose both the number of spins they would like to engage, as well as their value. If you would like to experience a more “hands-off” approach to your gaming session, you can initiate as little as 5 spins or set the game to process a maximum of 100. You can also determine whether the autoplay function should disable itself in the following events: scoring a jackpot, losing a specific amount of cash, or winning a specific amount of money.

The fact that the Faerie Spells slot was created on the HTML5 software platform, makes the game highly compatible with all conventional desktop and mobile browsers. The only visual difference between the computer and mobile version of the game is a slight repositioning of the interface controls for smartphones and tablets to make the experience more comfortable when gaming on an iOS or Android device. Because of the slot’s high level of optimization, there is no loss in quality when it comes to the slot’s graphics and audio effects when playing on different platforms.

Lasting Popularity Because of Its Features

Although exceptionally beautiful, the fantasy visual theme of Faerie Spells isn’t exactly innovative; however, this is not why the game manages to remain as one of the most played slots of Betsoft to this day. The high degree of control that the title provides to its players allows for a more hands-on approach to the gameplay. While we would have loved to see slightly higher betting limits, Faerie Spells still allows players of all bankrolls to engage in some action. If you have the chance to play Faerie Spells for real money or in demo mode, we definitely recommend it!

I’ve Played Many Bonus Rounds, but I Haven’t Landed Any of the Jackpot Symbols – Why?

Given the fact that the jackpot symbols have the potential of releasing a massive payout, it is normal for them to appear a bit rarer than usual. Even then, whether they appear or not is decided by the same RNG algorithm used by the slot for the generation of any results during gameplay.

Can I Receive a Wild Symbol during Free Spins Mode?

Unfortunately, this is not possible. Although the bonus mode is part of the slot, its gameplay is completely different in technical terms. The unique set of symbols that are used in combination with the specific gameplay conditions for the “bonus round mode” cannot accommodate the presence of a wild symbol.

Is There an Actual Difference between Regular and Turbo Play?

Albeit a slight one, there is. While in regular mode, players can process two spins in approximately three seconds, the turbo mode brings the time down a notch by a second. The timing is the same for spins that are done in regular play, as well as in FS mode.