Staying true to the overall theme of the season, the Halloween slot game was released in October of 2017. The slot’s developer, Microgaming, managed not only to successfully implement the overall “eery” vibe of the game, but also create the type of slot that is considered to this day to be a remarkable classic. Due to the fact that the design of the slot was based on a popular franchise, this title continues to have a lot of fans. In this expertly crafted Halloween slot review, you will find everything about the game, including how to play it better!

The Halloween Slot Machine – The story of the Myers Movie

Although the initial impressions of the slot’s design may strike people as strange, the different visual elements will immediately prompt moviegoers to recognize the familiar setting. All elements, characters, and effects are based on the popular horror/slasher movie from 1978, called “Halloween”. The story itself is about a fictional masked serial killer called Michael Myers, and his escapades in the fictional city of Haddonfield. Microgaming have done a fantastic job in recreating the iconic Mike Myers house, which serves as a basis for the slot’s gaming interface!

The first unique feature of the Halloween slot machine is seen in its gaming layout, which contains five reels; however, the symbol rows of those reels can switch between three and four after each spin. Halloween uses 12 symbols in total (Wild, Bonus, Laurie, Loomis, Annie, Lynda, Revolver, Knife, Clown Mask, Telephone, Matchbook, and Knitting Kit). All of the main characters will depict high paying symbols, while the “items” are considered low paying. The Wild and Bonus symbols are special, and will either trigger a specific gaming feature, or enhance an already present one. If you’re interested in seeing them for yourself, you can check out the Halloween slot machine in the above casinos.

Explanation of the Special Symbols Functions

If you happen to land a Wild symbol anywhere on the reels, it will substitute all others in order to form a winning combination! This is a useful feature; however, the only thing a Wild can’t replace, is the Bonus symbol, also known as a “scatter”. Scatters don’t need to be connected on a payline in order to activate its special feature, which means that as long as you have at least three of them, you will activate the most desired bonus mechanic in the game – the “Trick or Treat Wheel“. 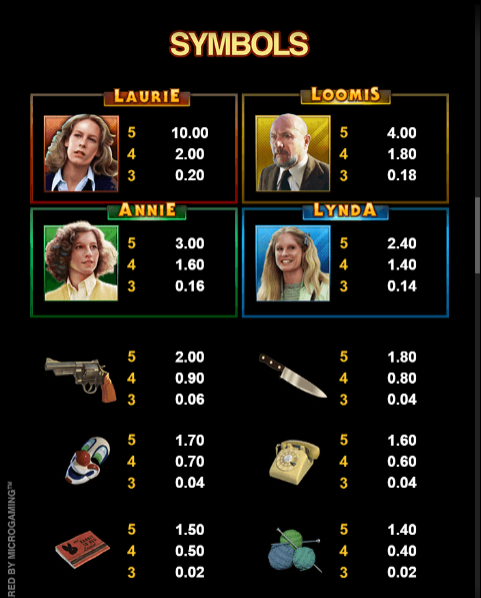 Trick or Treat Wheel Feature – Access to Many Prizes

Once the wheel has been spun, the player will collect cash prizes. There will be a winnings multiplier that will be applied to every following collected prize, which can reach up to x10 a player’s current bet! Once you hit the wheel spin button, you will land on one of the following fields – an instantly multiplied prize (value depends on the number shown in the field, or a movie character). Landing any of the character symbols (except Mike Myers) will grant the player 9 free spins! On the other hand, if you’re lucky enough to land on Mike, you will enter the Boogeyman Bonus mini game.

Once you’ve activated the mini-game, the slot will show a stairwell and 16 maple leaves on the right side of the screen. The player will then proceed to pick leaves one by one, and they will uncover one of three things – an instant multiplier pumpkin prize, a knife, or a killer icon. Except for the knife, everything will grant you a specific amount of money, which will be based on your latest slot bet; however, if you uncover Mike, then you will receive a prize that’s half of your current bet, and the Boogeyman Bonus game will be terminated.

If you land a knife, it will act as a “safety net”, and prevent the feature from ending if you flip a leaf that has Mike hiding underneath it. One knife will work per one serial killer icon, and there is a maximum of two knives that can be revealed. Regardless if you win the mini-game or not, you will still return to base play with a monetary prize. 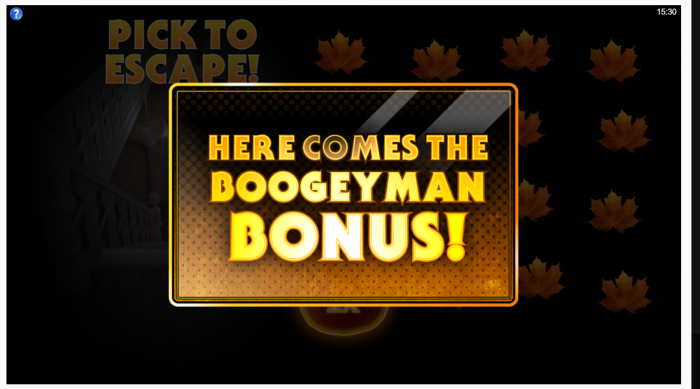 The Maximum Possible Win in the Game

The first thing to note here, is that the Halloween slot game doesn’t have a jackpot. Instead, we’ve managed to discover that the maximum possible win here is going to be x500 a player’s bet. The amount of money this value will equate to, will be determined by the exchange rate between the game’s credit units and the currency used by the casino which offers the game. For example, if the maximum allowed bet amount is £20 per spin, then the maximum prize will be £10,000; however, if the gambling establishment has allowed a maximum of £200 per spin, then the largest amount of money that can be won, will equate to £100,000.

The Basics You Need to Know About the Halloween Slot Game

The first thing we should mention, is that the game is incredibly easy to play! Simply place your bet and push that green spin button in the middle. The Halloween slot RTP rate is 96.01% which is incredibly impressive, given the fact that franchise licensed slots have notoriously low return-to-player values. Regardless of the bonus mechanics within the slot, that RTP is fixed, and it won’t change or fluctuate based on what’s happening during gameplay.

The game is described as having a “mid-to-high” volatility factor, which means that players shouldn’t expect to form winning combinations very often. On the other hand, when they land a winning spin, even the smallest rewards will be considerable (based on your current bet, of course). With that being said, the smallest possible win you can form will come from a combination of three Knitting Kit symbols, while the largest win will be granted from landing five Laurie symbols.

Wandering Reels – A Better Understanding of the Pay Lines

When it comes to paylines, the Halloween slot machine has three sets of 50 fixed paylines each! You see, “wandering reels” is a mechanic in which right before every spin, a selection of three reels will be chosen between the left, middle, and right parts of the gaming interface. The chosen set of reels will be indicated by the shifting house porch posts, and will land with four rows, while the remaining two reels will have only three. Although players will notice that the Wandering Reels will usually shift after every spin, the shift is based on a random basis, meaning that they might move or not.

A player has a chance to land a “Jumbo Symbol” that will span over the entire set of wandering reels, essentially covering a 4×3 space. Jumbo blocks may also land partially but can still become a part of a winning combination. Regardless of the position of the Wandering Reels, all winning combinations will be formed from left to right.

Get Used to Adjusting Your Bet

Since the game operates in coins, you will be able to adjust the value of the coins, which will form your total bet per spin (BPS). When forming your BPS, you can choose to play up to 8 coins per line. Each coin can have a value between 0.01 and 0.50 credits. Every spin in the Halloween slot game will require 50 coins.

So here is an example of how your BPS is going to be formed – if you choose to spend one coin per line, with a value of 0.01 per coin, the BPS will have a value of 0.50 credits. On the other hand, if you want to go all out, you can select to spend 8 coins per line (which will bring you a total of 400 coins for a spin) with a value of 0.50 for each coin, your BPS will equate to 200 credits!

Usually, online casinos represent credits to currency in a 1:1 ratio, which in this case would theoretically mean that the maximum BPS in the Halloween slot can equate to £200. On the other hand, the top-rated casino sites in the UK are known to use a 10:1 ratio, which means that a maximum BPS here would have a value of £20.

You can always make the slot play itself for a while, and all you would have to do is click on that autoplay button, choose your preferred number of spins, and watch in ”suspense”. You can choose between 10 and 100 spins. The cool addition here, is that once you’ve chosen your preferred number of spins, a counter will appear on the right side of the spin button, showing you just how many of the spins have been played out.

While the game doesn’t seem to have any additional options that would allow you to program the conditions under which the autoplay will disable itself, you can stop the feature manually, simply by pressing the spin button. The only time the game will disable the mechanic on its own, is if it triggers a bonus feature of any kind.

The Mobile Experience and Overall Quality

As a slot that is considered to be from a newer age of iGaming development, it doesn’t come as a surprise that Halloween runs flawlessly on mobile devices. Whether your smartphones or tablets run on Android or iOS, all that is required from you is to have a recently updated browser app on your preferred device.

Given the fact that the game was made on HTML5, the visuals are strikingly beautiful. Furthermore, there are controls that will allow players to either choose between basic and enhanced settings. If your device is newer, it is recommended that you leave the graphics enhanced – Mike himself will appear from the sides of the house for a brief moment, while the falling leaves effect will continue to immerse the player in a creepy atmosphere.

Тhe Slot Will Continue to Be a Success

The Halloween slot game represents an entire horror movie culture that to this day collects and searches for everything connected to this genre. While Microgaming have done justice to the franchise with their iGaming alliteration of the brand, the truth is that the Halloween slot is an excellent game. It is rich in features, it has an innovative reel layout mechanic, and a bunch of other cool elements. Although there are some minor things we consider as drawbacks (such as the lack of a proper spin speed function), Halloween is definitely a slot that will entertain you regardless if you’re a beginner or a seasoned player. Go on then, give it a go!

Should I Play the Halloween Slot for Free before Spinning for Real Money Wins?

Absolutely, in fact – we recommend that you do! Playing the Halloween slot game in demo mode is a great way to learn not only the mechanics of the game, but also to practice how to set your bet properly. If you make a mistake, you won’t have to worry about it since no real money would have been lost. Once you feel confident enough to play the game for real, you can wager a few quid.

Where Should I Play the Halloween Slot for Real Money?

Are There a Lot of Free to Play Halloween Slots Available?

Indeed, there are however, the Halloween slot game that was based on the iconic John Carpenter movie from 1978 is only one. Halloween-themed slots are quite popular, but only this one can truly provide the eery and suspenseful atmosphere that was present in the original movie.

Is There Anything to Download with Free Halloween Slots?

Luckily, no! Microgaming has developed the Halloween slot game with full compatibility with the most popular browsers, so you won’t have to worry about having to download any additional resources on your computer or mobile device. Simply open the browser of your choice and start playing!