September of 2015 saw the release of an incredible PC and mobile slot called the Taco Brothers. Created and published by the renowned casino software developer Elk Studios, this new slot was introduced to the iGaming industry nearly a year after HTML5 become the most popular software development platform for online casino slots. When the Taco Brothers came out, it quickly became fan favourite for its vivid graphics, exceptional gameplay and interesting features. In today’s Taco Brothers slot review, we will explain everything about the game.

The Taco Brothers Slot Has an Exceptional Visual Story

In the fictional village of Santa Maria, tacos were available to everyone, until one day the “evil captain Diaz” appeared, and took the tacos from everyone. Three brothers, Paso, Pepe, and Pico, decided to use their talents to liberate the village from the lack of tacos, aided by captain Diaz’s beautiful daughter – Senorita. Today, players have a chance to experience the story of the Taco Brothers slot in glorious HD on any type of computer or mobile device such as a smartphone or a tablet. 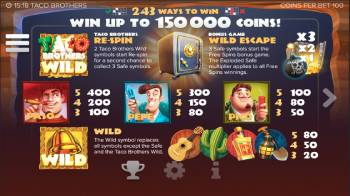 The Best Bonus Extras in the Taco Brothers Slot

This slot was developed with the classic 5×3 layout, with regular “rolling reels”. There are ten symbols, four of which are low-paying ones (Guitar, Tequila Bottle, Cactus, Shovel), three are high-paying ones (Paso, Pepe, Pico) and three special ones (wild, Taco Brothers Wild, and the Safe). The biggest (and best) casino bonus feature of this game, is called “The Wild Escape” free spins mode, where the special symbols perform specific functions and provide additional wins. The re-spins in the Taco Brothers Slot, have a chance to activate only during the base game! They will trigger a re-spin of the adjacent reels to their left or right sides while locking reels 2, 3, and 4 in place.

The Wild Escape Is a Complex Slot Mechanic

Once three “safe” symbols are collected, the interface of the slot will position itself beneath the “village’s ground” in a mine shaft, where the three brothers will try to “escape”. Just before the bonus game is initiated, the “safe” symbols will explode, revealing a win multiplier from 1 to 3. Once the bonus game has concluded, the highest multiplier number from the safes will be applied to all of the winnings made in the free spins mode!

The slot will then display a 4×3 pattern, and at the far bottom right, the symbol of the first brother will start to move to the far left side of the bottom row. The “running wild” brother symbols replace all others, with exception of captain Diaz, or his daughter Senorita. If a Diaz symbol is shown on the reels, a brother symbol becomes “locked”.

The Senorita Symbol Can Continue the Bonus Feature

Upon the end of the game feature, a screen will show the number of accumulated winnings. Captain Diaz will be seen struck by lightning in the background. Although you can play Taco Brothers for free and experience this mechanic, playing it for real money may win you a whole lot of money! Depending on the player’s luck, a constantly appearing Senorita symbol can theoretically result in “unlimited” free spins!

Know These Facts before Spinning the Reels of Taco Brothers

The first thing players should note is the fact that they won’t be setting a particular “bet”, but rather a “bet level”. The slot requires 100 coins per spin, and a player will choose a monetary amount that will represent 100 coins at all times. The rewards from successful symbol combinations will also be granted in coins. In total, there are 12 bet levels, which go from 0.10 to 50 units of currency. The game supports more than 30 different currencies.

The Taco Brothers Slot Looks like It Should Be An Actual Animation TV Show!

Saying that the graphics, animations, visual and sound effects are amazing, would be an understatement. The overall quality of this game is explained by the fact that Elk Studios is an award-winning developer that passionately does their job. For the optimal experience, the company suggests running the game’s HD graphics on a resolution of 1600×900, or 16:9. 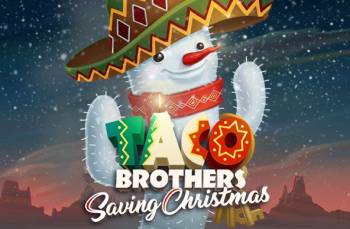 The Sequel to the Origin

The success of the original Taco Brothers slot prompted the creation of the sequel of the saga, called “Taco Brothers: Saving Christmas”. This other title actually appears to be exactly like its predecessor, as everything is the same – the bet level amounts, the symbol payouts, and everything else, except for the graphics and the music. Every symbol Is given a “Christmas makeover”, while the background music is the ever-known Christmas carol song “deck the halls”, composed by Thomas Oliphant.

The Taco Brothers Slot Will Always Be Fun to Play

Taco Brothers is another Elk Studios slot title that will impress with its incredible colour scheme and a variety of features, but that’s not all. The seamless animations combined with the exceptionally balanced betting system will allow you the freedom to choose the intensity of your own gambling without having to feel any sort of “pressure”. Available in 23 languages, this Mexican food-themed game is definitely one that you would like to try.

Is There Something I Can Do to Get a Big Win in Taco Brothers?

Creating your own wagering scheme or using the betting strategy templates may be the best answer to that question. Most big wins will occur during the “Running Wilds” mini-game, and if you’ve happened to adjust your betting level to more than the minimum, you might be looking at a great payout in the end.

Should I Expect Any Drawbacks during Gameplay?

No! The game’s primary caveat is the fact that during “base play” the only bonus feature that players can hope to get, is the “re-spins”. While regular play might provide you with some wins, they won’t be as big as the ones granted by the bonus game.

How Can I Deactivate a “Betting Strategy” Pattern?

In the wager selection option, simply navigate to the page where it says “no strategy selected” and any previously selected wagering pattern will be disabled. If you feel that a particular strategy pattern is not adhering to your specific needs, you can also modify the currency levels from the bet menu.